We are descended from walnuts.

Proof? Below is the incontrovertible visual proof.

Once upon a time there was a much more advanced civilization inhabited by beings with brains shaped exactly like walnuts. Our current brains are a de-volved, deteriorated version of the much more interesting and effective original. We can still glimpse its splendid earlier form by observing a walnut.

As you see in the photo I've just taken and placed next to a standard brain diagram, there's no split between the two halves in the wondrous walnutbrain: left and right are tenderly, harmoniously joined. Simple really.

I will now eat the proof and go to bed. Amazing what revelations can occur at 4 am. 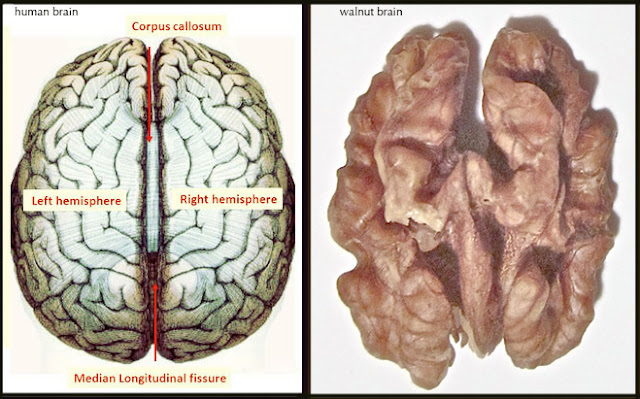 Posted by Natalie d'Arbeloff at 4:57 am

Well done Natalie! My most persistent revelation at 4am is that I am awake - and I want to be asleep! It's a pity the Nobel prize for physics has already been awarded for this year - don't know about chemistry and the "soft" sciences.

Tom, no doubt the Nobel committee are awake at 4am and scouring the internet for potential candidates so they'll have immediately put this on their shortlist for next year. A new category may have to be invented for such a mind-blowing discovery.

I'd stick with 4am wakefulness if I were you - you never know what AHA moments may suddenly hit you, in the kitchen, having a snack.

Tom, I just looked it up and founds this:
http://www.seriouseats.com/2010/06/walnuts-the-ultimate-brain-food.html

I'm honestly gob-smacked! Have never known any of this. You'd better start eating walnuts if you want to get some sleep. Perchance to dream of ancient civilizations?