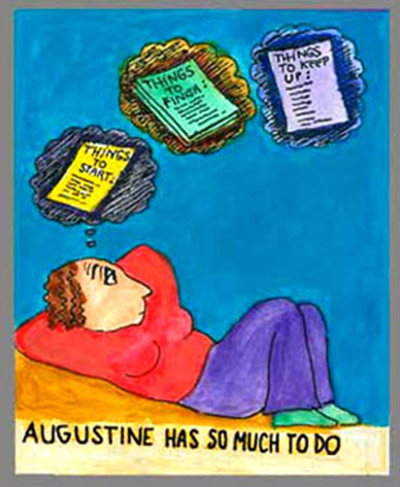 From Inertia in the Augustine Adventures.
Posted by Natalie d'Arbeloff at 2:59 pm

.....and at the end of your life, you will still think that you have not done enough!

Tom, that's true, but doing WHAT not enough is the question!

Hattie, you mean doing too much or not enough? Hope you're enjoying either state anyway!

Your Overdonitis Syndrome sounds so elegant compared to the Workaholic Syndrome that plagued me for so many years. Now that I no longer suffer from it, I am less content though.
Your Portuguese sounds different from the one spoken in Portugal. Does that make sense or is it I that hears sounds differently?
Wonderful what you got yourself into!

Ellena, maybe you should try the Overdonitis version of Workaholism??

My Portuguese is Brazilian rather than Portuguese Portuguese. I lived in Brazil, never in Portugal, but in any case my accent is far from what native speakers sound like! Mine is more like Spanish because I learned Spanish first(in Paraguay).I don't do the sybilant "shh" sounds correctly at all in Portuguese.

And Dave's a smart guy. Years ago I submitted a long long piece to that web-entity of his beginning with Q. I sought to illustrate the levels of inadequacy in various French academics' attempts to translate Shakespeare into French. He turned it down. Dave's got a good eye for a faker.

Robbie, I guess you mean qarrtsiluni? Unfortunately that entity is no longer active though its past entries can still be found on the net.
Was your rejected contribution a spoof exercise in academic writing?

A propos: when I read several of the published translations of Blaise Cendrars' poetry by American or English academics, supposed experts in both the French language and poetry, I was astonished at how inept they were in both departments. And I'm no expert! It may be that having to carry the weight of academia (with all that this implies) prevents those distinguished, laureated persons from lifting their heads up and smelling the air, hearing the birds, etc.

It was worse than that it was serious, dead serious. It even made two or three good points but it was essentially meretricious. Anyone with O-level French and a sub-O-level knowledge of Shakespeare could have done it. Once I'd made the point that the best such translations can aim for is (a fairly simple) rendering of the plotline, I'd said it all. In fact the bareness of this premise can be identified without bringing in another language; there are few Anglophones who can grasp the meaning and allusions of an obscure WS play - Timon of Athens is a good example - up to a level of 40% on hearing it presented for the first time. The language is, to repeat a cliché, foreign.

Mind you I gave it a good go, covering MoV, MND and Hamlet, and running it out to 3000 words plus on the grounds that excessive length can in some cases fatigue the reader and cloud critical judgment. But Dave wasn't fooled. With the heartiness of a public-school teacher he urged me to further efforts, obviously working on the idea that if I were out to fatigue anyone, I should start with myself.

You could, if so inclined, now write a spoof of yourself writing a dead serious treatise on how not to translate Shakespeare. Oh...you've just done that, haven't you?