REMBRANDT AT THE NATIONAL GALLERY 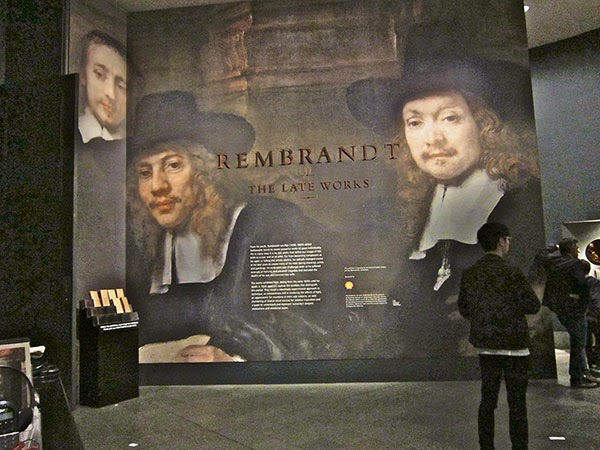 Entrance to the exhibition

The little ash-grey brain cells start leaving us the minute we're born and by middle age they've
taken early redundancy and when we're OLD they've emigrated in droves to wherever brain cells go when they're not in our skulls. The stubborn handful which remain to await final expulsion are just about capable of turning on the tv or perhaps taking up a hobby that doesn't take up too much room or make a mess.

This, in an exaggerated nutshell, is what scientists, academics and other highly qualified authorities assert is fact. Some of them have also done research which proves that ground-breaking innovation in art, as in other areas of human creativity, happens, when it happens, only in the young. The rain in Spain stays mainly in the plain.

In my un-authorised opinion youth is a flexible definition, one that can be stretched like elastic if the pull is strong enough. And the strongest pull of all is creativity itself, if persistently exercised, sustained and nurtured. Which is why certain individuals, Rembrandt for example, throw the facts about ageing out of the window. 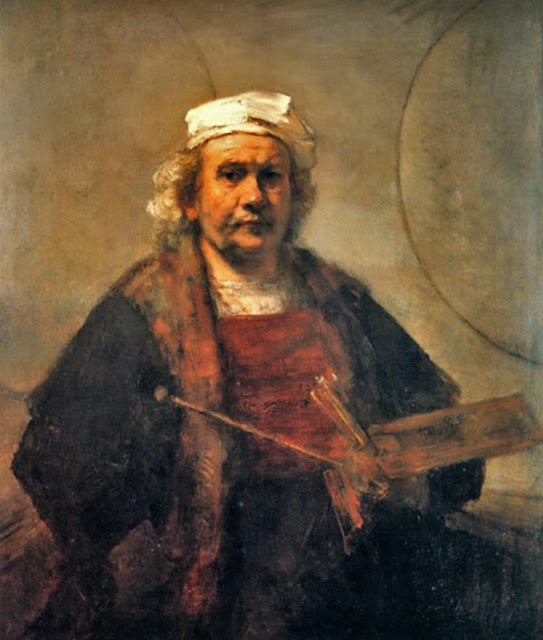 Old Mastery, such as I was privileged to witness last week in the magnificent National Gallery exhibition of Rembrandt's late work, is proof that brain cells can and will obey the instructions of genius rather than the robotic agenda of nature. He died aged only 63, a mere stripling by modern standards, but the old man who looks out of his uncompromising self-portraits has reached a state of understanding which transcends age and a mastery of his craft which grants him freedom to focus only on what really matters to him - to the genius in him - and to discard the rest.

..In ancient Roman religion, the genius was the individual instance of a general divine nature present in every individual person, place, or thing.
...attendant spirit present from one's birth, innate ability or inclination’, from the Latin root of gignere ‘beget’. 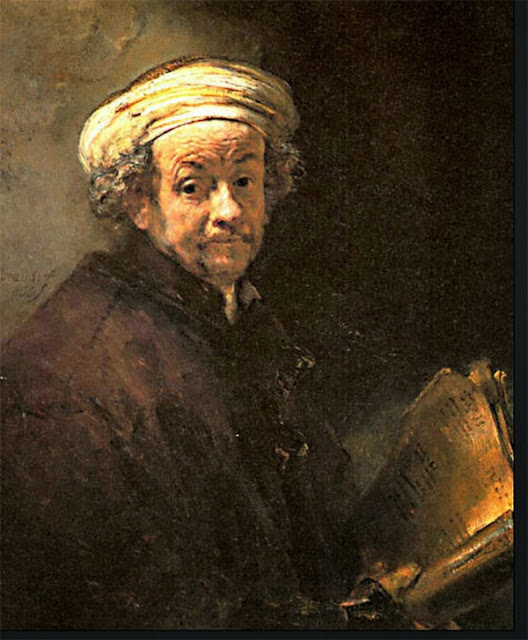 Rembrandt, Self-portrait as the Apostle Paul 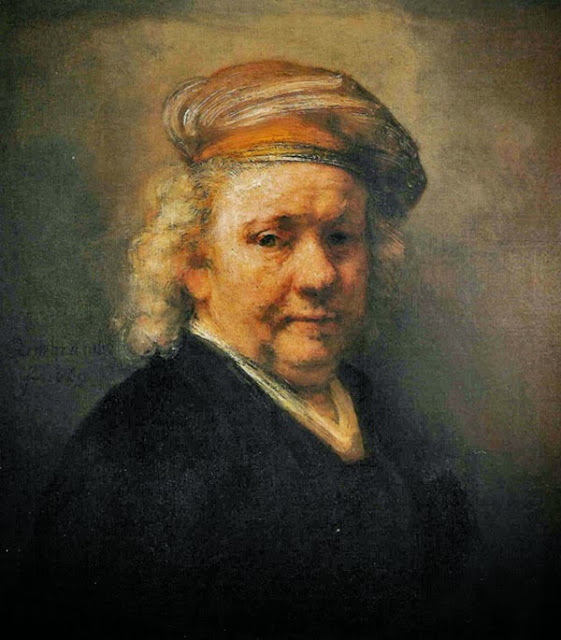 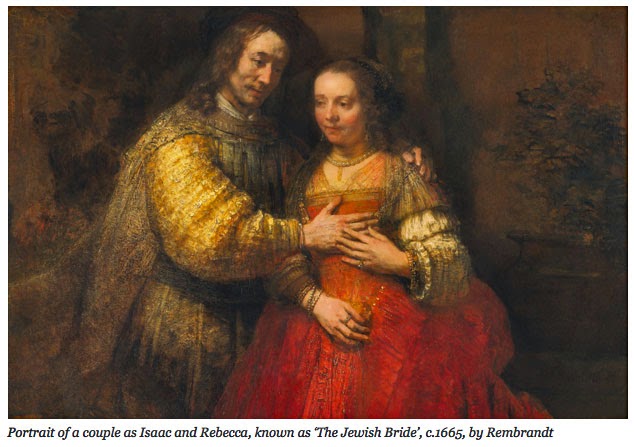 Could it be that the attendant spirit in each of us reaches a state of maturity only when we allow it to become the dominant influence in our lives? Whatever form it takes, whether expressed through art or by any other means, it seems to be a path consciously chosen and pursued with unswerving dedication.

More than Rembrandt's bold, astonishingly modern handling of oil paint and the miraculous fluency of his drawings and etchings it was the compassionate yet unsentimental truth of the portraits which struck me. Technical virtuosity was always evident throughout his career but it is in these late works that you can feel he has jettisoned all desire to please, to compete or to be 'correct'. His eyes are not looking at the audience, fans or critics, but into himself - the sadness, the losses in his life, his own failings and disillusions - but also beyond himself to the unknown and unknowable.
Posted by Natalie d'Arbeloff at 5:15 am

As you know, I'm a disciple of the 'late style' thesis. I love Rembrandt and really want to see this. I'm more than a bit worried about viewing these wonderful paintings over the heads of a jostling crowd, though - how did you find it from that point of view?

Jean, I didn't book ahead but took a chance and got in on a rainy weekday late afternoon. The crowd wasn't bad at all and being shorter than nearly everyone, I simply plant myself in front of pictures and let people look over my head. Also, so many visitors have their eyes down on the booklet and their ears plugged into audio up at the paintings, I've moved on.

Something got swallowed up at the end!
Last sentence should read:
...and their ears plugges into audio that by the time they actually look up at the paintings, I've moved on.

You are fortunate to have seen these works, which display Rembrant's mastery of light and shadow.

Bruce, yes, mastery of light and shadow in the human charcter too!

Beautiful riff on ageism, and on the amazing work of "old" Rembrandt, whom I love. Gorgeous paintings you've selected here. I wonder, were there any of his prints in the show?

Yes, lucky you to see another fantastic exhibition so near home, Natalie!

Marja-Leena, yes there were a lot of his etchings, various states, etc. Tiny prints but fascinating to see his working process, how he keeps reducing the amount of detail rather than adding to it.

The National Gallery has published an excellent book of the whole exhibition - paintings, drawings, prints - with high quality reproductions. If you're interested you can order it from their bookshop (same link as the National Gallery) or probably from Amazon etc. Here is the info:

It's a thick volume (303 pages) and very reasonably priced.

What I see is how much Rembrandt communicates of his inner character in his self portraits. Amazing.
Thank you for this wonderful appreciation!

Would love to see that exhibition, thank you for such an inspiring review.

Are you sure this research "proves" the thesis about youth and creativity? That's a very strong word to apply to creativity which is surely a judgment that can only be subjective. I'd be more inclined to say that the research established a tendency since there will nearly always be exceptions in nature.

I think the key to this is contained in the somewhat dubious word "ground-breaking" which I take to be entirely new and original. Possibly "unique" used in its exact form. Many creative people - and they include scientists - produce a unique work and then continue to create works of genius which are not necessarily unique. Rembrandt belongs to a very small elite (I'm guessing) where the members have improved wih age. His latter-day self-portraits are, arguably, his best works. No doubt there are others but I suspect they are in a minority. Energy dies away as we get older and energy is probably an essential component of revolutionary acts.

Hattie, the exhibition includes many of his late portraits that are not self-portraits and in each of them he reveals the sitter's character in an extraordinary way that manages to bare all while being compassionate at the same time.

Lucy,I too wish you could see it. Worth making the trip to London for! Any plans?


Robbie, I was being sarcastic when I wrote 'proves'and was thinking in particular of the research promoted by the professor who was on the panel with me at that conference in France last year (whom I totally disagreed with). 'Ground-breaking' does apply to Rembrandt, as it does to Turner, Matisse and others, because they began doing things late in their career that no one else had done before. Such individuals may be an elite but I believe that it is a much larger elite than is evident- ie: well-known. My point was that sustained and constantly exercised creativity supplies energy and thereby defies the 'rules' of ageing.

Oh dear. I want to see this exhibition so much I can taste it, and it's only on through mid-January! Well, perhaps it will be the catalog for me -- but I'm so happy to be able to experience it a little through your keen eyes, Natalie. Did the show include drawings? As you know, I agree with you about Rembrandt's work, and also about your theory of ageing and creativity. I have every intention of improving with age and always feeling that my best work is ahead of me! You are just as much of an inspiration, Natalie.

Beth, I know you would love this show and really wish you could be here to see it - I'd happily go again with you! Yes it includes drawings (those that fit under the 'late work' category). The catalogue is truly excellent with superb reproductions and close-ups. I've just noticed on my copy that it's distributed by Yale University Press! So you could order directly from them, if you want it.

I ordered the books that accompany this exhibit as well as the one on Kiefer. My Xmas present to myself!

Those are great presents Hattie, I'm sure you'll enjoy them.

I'm going to be in London next week and I hope to be able to fit this in to a tight schedule. I agree with you about old age. It's really a liberating time of life. No need to try to please others any more.

I'm not sure why you haven't been able to get my blog to come up. It seems to be working okay. Do try again. I let it go for a long time, but I'm at it again now from time to time.

Hello Anne,are you going to be in London for more than a week? If so, send me an email and maybe we could arrange to meet up? I'm really tied up next week and not sure what's happening in December but let me know about your UK stay? Hope you'll enjoy it and do get a chance to see the Rembrandt show.

Just got the Rembrandt book and have spent all day looking through it. What a treasure!

Hattie, it certainly is. I've been reading it slowly and marvelling at the reproductions - such detail one isn't able to see in the originals!