Amazing is an over-used word but I'm going to use it lavishly because it's too much of an effort to hunt for alternatives and I have an excuse: bunged up sinuses knocked out my cognitive faculties since I got back from France and writing a blog post, let alone thinking of one, has been about as feasible as climbing Everest. But here I am now so it must mean that the wool filling my head is starting to unravel and will, I hope, evaporate if I continue to inhale menthol-infused steam.

Everything was amazing from the start of my privileged journey on Eurostar in a Premier class seat, breakfast served by solicitous attendants, and at the Gare du Nord my name was on a card held up by a chauffeur who took me to Deauville, a two and a half hour drive from Paris, without my having had to lift a finger or spend a single Euro just because I was one of the invited speakers at the Women's Forum. I was awed by the mind-blowing logistics of organising such an event, involving 207 speakers and 1200 participants from 70 countries, 600 organisations, 143 journalists, and much more. Amazingly, it all ran like Swiss clockwork with never a hitch, at least not visibly.

My hotel was at the top of a hill, on a vast golf course overlooking the town - that pale blue strip in the distance is the ocean. Below is the view from the window of my room and below that, moi-même in the mirror on the first night, ready to go out to dinner (flat golden shoes) to meet the organisers. The dinner was at another luxury hotel where the company and the food were....amazing. Normandy is known for its gastronomic delights but don't ask me what I ate, or drank, because I don't remember except that it was all super-delicious and frequently timbale-shaped. 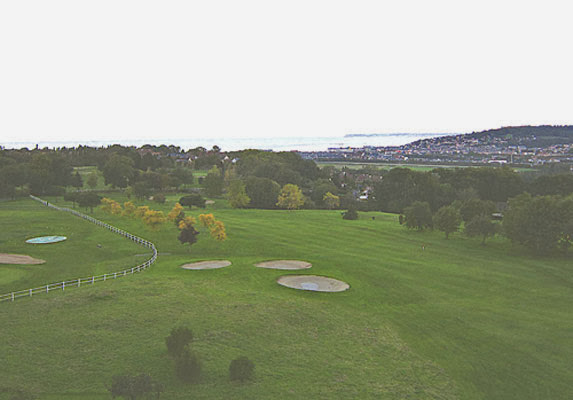 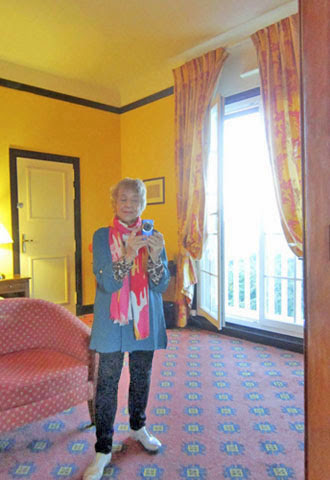 At first I wondered if I'd have to make a long trek down from the hotel every day to Le CID  - Centre International de Deauville - where the Forum was held, but I soon realised that all possible contingencies had been taken care of: a fleet of navettes (coaches) appeared at regular intervals to transport participants to and from the venue. So much was going on during the three days of the Forum's duration that I saw more of Le Cid's interior than I ever saw of Deauville but in the few glimpses I had of the town, it seemed to me like a designer film set, all posh boutiques, hotels and shuttered second homes, deserted except for weekends and holidays when the well-heeled from Paris and elsewhere roll in to play at casino, race-course, golf or yacht.

The nostalgic old-world, old-money ambiance surviving in a hard-edged new world was summed up when a well-dressed elderly gentleman hobbling with his cane down a shiny main street came up to me and said apologetically: Pardon madame, quel jour est aujourd'hui? (excuse me madam, what day is today?) It wasn't a chat-up line and he was perfectly sober and when I replied, he thanked me politely and hobbled elegantly away.

There couldn't have been a more vivid contrast between that tiny melancholy incident and the forward-facing, high-powered, high-achieving, high-heeled goings-on at the Women's Global Forum 2013: compete, cooperate, create. There's no way I can give an adequate report of the event or do justice to the myriad praiseworthy projects happening, or about to happen, in many countries thanks to enterprising, inventive, energetic, courageous and clever women world-wide and to organisations and individuals who support them. It seemed odd that I was there at all: moi, an art-worker usually found sitting in her imitation-ivory tower, making things of no discernable use to the real world and occasionally blogging about it: what on earth was I doing in such real-world company? I was very happy to be there but wandered around in a daze, not sure where to focus my attention. Most interesting to me were the conversations I had with some of the fascinating women I met. The Creativity and Aging session (the reason I was invited) was probably the least interesting part of the Forum, in my opinion. But I'll write about that in the next post.

One thing I did was to take photographs and, looking at them when I returned home, I see that visual content almost always holds my attention more than the verbal. The images I gathered and remember from this experience will, I'm sure, serve me for paintings or other media. I share some of them below. More words and pictures tomorrow. 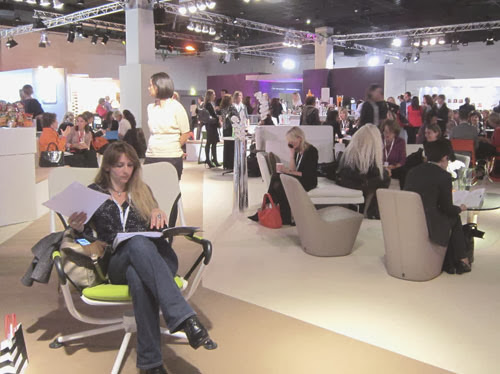 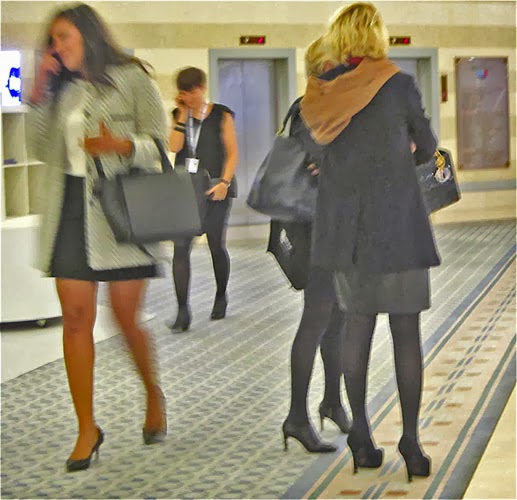 Heels and mobiles at the Forum 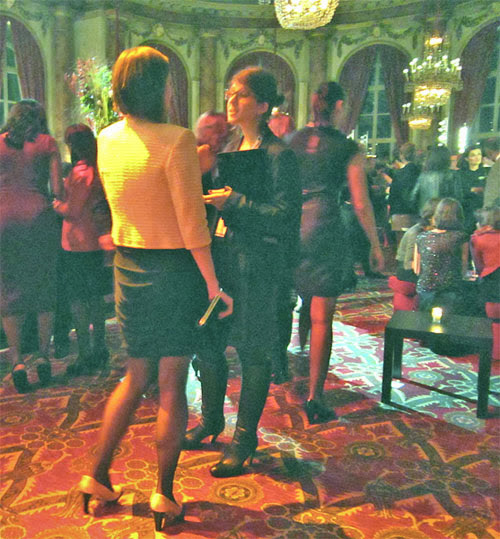 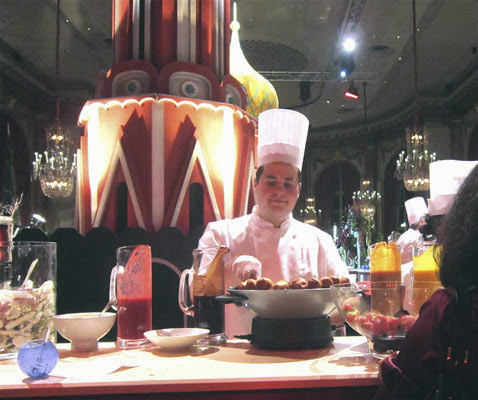 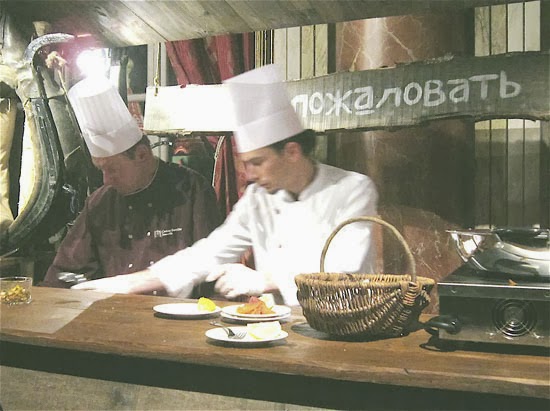 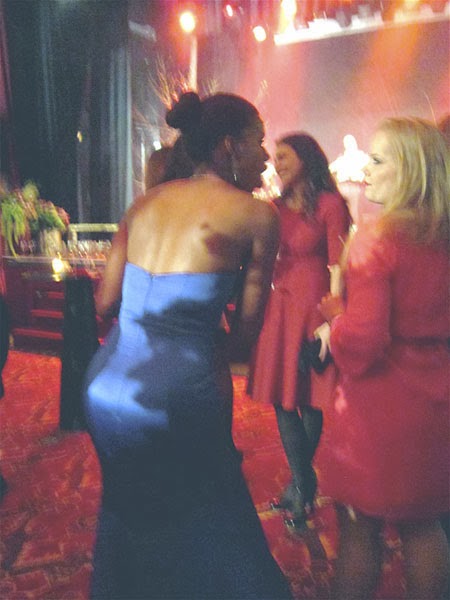 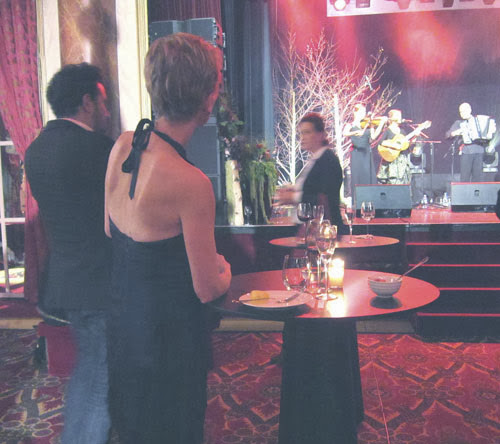 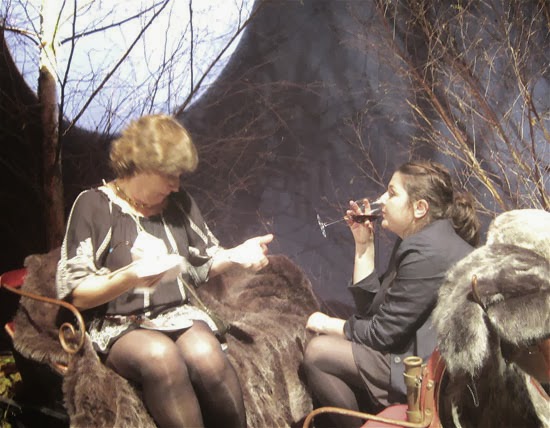 In a Russian sled 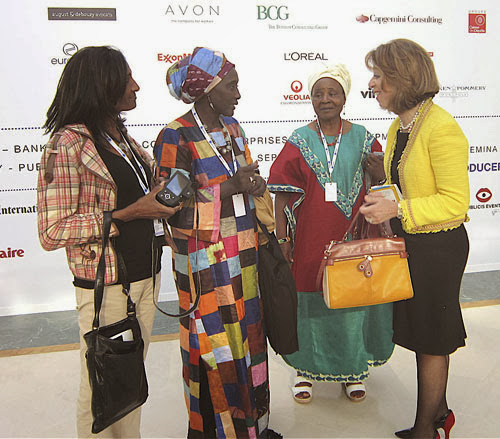 MORE
Posted by Natalie d'Arbeloff at 12:51 am

Oh, what a treat to imagine the WGF through your eyes. I loved your description of its artful organization, too; I think anyone who has worked behind the scenes at any sort of conference of large event would appreciate not only what was achieved there, but your attention to its orchestration, too. :) That something that sounds like such a shimmering kaleidoscope of ideas and emotions and bodies and dreams--and pleasures, too, with that food and those images!--could be described as clockwork makes it seem nearly magical.

Wow, Natalie! There you were in such a posh setting with all those glamorous young ladies, being glamorous yourself. Bravo! I look forward to hearing about your talk!

Siona, 'shimmering kaleidoscope' describes it exactly. You should have been there.
Yes it was an honour and also very strange to be there.

Marja-Leena, I wish I had a journalist's skill to do a proper reportage but my view is a skewed one, leaving out so many details that matter. I'll do better tomorrow, maybe.

I looked and looked at the photographic record of your visit to Deauville, and......well I don't know what I felt, except that if this is evidence of women getting out-from-under, I wish them all the very best. It's not before time.

So sorry to hear of your indisposition. A few glugs of French brandy (which you must have brought back with you) will help sort things out.

The world is moving on apace, and some of those changes are to be welcomed, as evidenced by this conference. As for me, first stop the nearest hermitage.

Tom, I must admit that it's good to be back in my own little hermitage! But exposure to a world I am not so familiar with was a salutary experience. More on this later.

You deserve to be fêted thusly everyday, Natalie! :-) I hope you feel better soon.

I'm just very glad you still want to know us! These pictures really are very fascinating, I especially like the chef making stroganoff, and the Russian sled looks lovely - the woman on the right looks very happy to take a bit of time out with a glass of wine and some cosy seating!

It's always struck me as quite funny that all those chic Parisians want to hang out on a rather bleak, windswept, uninteresting bit of Channel coast (to a British ear, calling it the ocean is rather to glamorise it!), except I suppose it isn't very far from Paris. When we've passed through, it's seemed to me to have an odd sense of emptiness about it, even when there have been plenty of people about. There are nice places around there though, Honfleur is pretty and the countryside is dotted with picturesque estates with big houses and parkland, as well as quaint cottages etc.

Anyway, you clearly made the most of this genuinely amazing experience, looking forward to hearing more!

Ivy, I couldn't possibly adapt to that life-style every day! I'm more of a hermit at heart and even the fabulous food and interesting company would be too much for me.

Lucy, I was just a tiny needle accidentally dropped in a big and prestigious haystack.
I got the same impression of emptiness about Deauville, like a film set waiting for the film to be made.I think its heyday was long ago, in the 1920s and early 30s. But the countryside does look beautiful, the little I saw of it from the car window.

Given the evidence in pix 3, 4 and 5 an event for long-legged women.

I am sure you were a jewel to crown them all.

Roderick, yes indeed, I've never seen so many long (and good-looking) legs assembled in one place before. My very short ones couldn't compete. In fact, my head kept bumping into those huge designer handbags.

Dick, details coming up shortly, as soon as I can poke my head out from under the chaos which currently invades my flat (being re-painted).

Adam, I appreciate the praise but there were far too many crowned heads there for me to shine!

I love your outfit and your Chaplinesque charm. The African women were beautifully dressed, too.
Too bad about the aging and creativity panel, but I am glad you were there.

What do you think was the goal of this conference?
BTW: I did not realize how much you have accomplished as an artist. You are too modest, maybe?

Hattie, 'Chaplinesque charm' is just what I want to hear - how did you know?
Yes, I love the way African women dress and wish I could imitate them. But unfortunately I'd look a complete idiot and phony if I tried.

The goal of this conference? You'd have to look at their website for an answer:
http://www.womens-forum.com/
I think that networking is probably a major objective in all such gatherings but the giving of awards, the promotion of individual and corporate humanitarian and/or business schemes, are included. But I don't know how to sum it up.