If you are in London you're very welcome at the Private View from 8 to 10pm on Sunday 1st December.
I've made a page here showing the seventeen works which will be exhibited. Photos of most of these paintings and box-constructions have already been seen on the Blaug at various times but since I'm clearing space on my walls it seemed the right moment to put them up for sale.

Below is a photo of where I slept, or rather didn't sleep, last night. The amorphous shape on the right is a pile of builders' gear covered with paint-spattered dust sheet. The reason I dragged a mattress to try and sleep there was because the noise noise noise noise NOISE NOISE coming from a party in a house next door was vibrating the walls of the bedroom and shattering my ear drums. It was no better on the floor of the living room and as the repetitious pounding and shouting went on and on until one, two, three, four in the morning I dialled the number for noise pollution and shaking with rage demanded that something be done to stop this torture. Calmly, wearily, having heard it all before, someone took down details and said they would try to investigate. Ages later the noise stopped but I don't know if it was because the noise-police arrived or if the partying yoofs finally got tired. 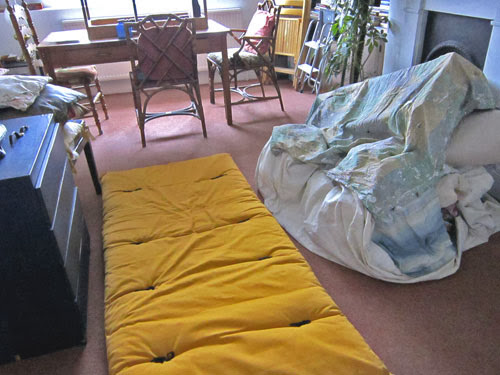 I know what I sound like: grumpy oldie objecting to young people enjoying themselves. Damn right I object because ear-drum-shattering by imbecilic repetition of the same note banged endlessly on metal drums at top top top volume along with wowoowoowoo howling cannot by any stretch of imagination be classified as enjoyment unless those enjoying it have lost whatever soupçon of brain matter they ever had and it's unlikely they'll ever get it back because it's been mangled by the NOISE.

Oh yes I'm ranting but maybe that's because I didn't sleep and also because torture-by-music actually is torture, as used on prisoners, for instance at Guantanamo. So how do innocent young party-goers get away with the music-torturing of innocent neighbours? That's what I want to know.

That's one of the things I hated when we lived in town. I totally relate and I wasn't old at that time either. People should be more considerate about noise pollution.

Rain, luckily this kind of excruciating noise hasn't happened before on my street. But noise pollution in general is now so deeply ingrained in city life that I don't see how it can ever be eradicated unless there was a huge anti-noise public protest. How likely is that?

Now and again I come across posts in the blogosphere which awaken a twinge of nostalgia for London! It's a shame your exhibition is so far away.

Noisy parties that go on late into the night are inconsiderate and inexcusable, whatever the age of the participants. And it's not just a feature of city life.

Many years ago when I was living in Watford and Lindsay and Zoe were toddlers, there was a party much as you describe next door. I asked them personally to turn down the music and was told to 'fuck off and die'. I rung the police who reacted in exactly the same manner as did yours.

So at around 8.00 the following morning, assuming that hangovers of Krakatoan proportions would be being nursed next door, I wheeled my 250 watt bass amp with its two 12" speakers next to the shared chimney breast, connected up the record player and turned both appliances on. I selected a couple of albums - Little Feat and Captain Beefheart, as I recall - for their rich bass frequencies and shared them at between 50 and 80 watts with the neighbours. My wife took the kids out and I sat in the garden to observe any response. It took some 10 minutes before erstwhile partygoers began to make their dazed way into the garden in nunbers and after a further 10 minutes I went in and turned everything off.

It's the only act of pure revenge that I've ever wreaked in adulthood, but it was deeply gratifying.

Dominic, it isn't just the loudness, though that's bad enough, but the mind-boggling crap that these people actually believe to be music. I imagine factories where deaf or ear-blocked slaves are churning out stuff which is then labelled disco-sound or whatever, without anyone having heard what it actually sounds like.

Dick, that's just the sort of revenge I would have loved to inflict next door this morning. But given their immunity to the volume and kind of sound that was blasting from their premises all night, I wonder if they'd even notice a dose of the same sort of thing coming at them from my place. Better still would be the torture treatment: blasting it at them day and night for months. But then I'd have to leave the planet.

I've been trying to think of a good "revenge playlist". At first I thought of stuff like Stockhausen Opera, or John Cage's electronica. Lou Reed's Metal Machine Music? But then, of course, the obvious choice would be the far, far gentler
Jesus Blood Never Failed Me Yet by Gavin Bryars. On continuous play, of course. Do you know it? (It starts very quietly):

My only association with paintings is that I buy them. This avoids the more difficult consideration as to whether I'm equipped to judge them. Buying means the question isn't put. I see the self-portrait is, alas, NFS. I respect your decision but I wonder, nevertheless, if you'd be interested in knowing what my top offer would be. Perhaps I'm behaving like a parvenu even mentioning the subject but if no money changes hands then what remains is a theoretical measure of my appreciation. Ich kann, as Martin Luther said, nicht anders.

I too have nightmares about noisy parties. The only answer is a detached house which I now have. I have of course paid the price im removing myself from the swim of London. In the end it's one or the other. By definition the swim is a noisy place.

Dominic, all good choices but I'd never heard the Gavin Bryars one until you mentioned it - that would drive me crazy within about 5 minutes so an extended play over several days should would do very well to punish noise-offenders anywhere.

Hattie, h'm...Bolero. Yes, but maybe too melodious for torture?

Roderick, send me an email so I can hear your offer? (address at the bottom of right-hand sidebar on the main Blaugustine blog). I'm chuffed that you are even considering my weird self-portrait!

Bolero top volume! They will go crazy from the earworm effect.

Hattie, yes it could work but maybe the tunefulness of it isn't torture enough.

Your exhibition - Bravo! Excellent! Exciting! I would visit if it were not a little far ... in fact, I would love to visit! Best wishes, Natalie!

Thanks Adam, it would be great to have your visit - maybe one day? When air travel is faster or distances shrink?

Natalie, I took a few photos of your exhibition, which I've posted on Facebook: https://www.facebook.com/jean.morris.3192