Throughout the weekend, each person in the group had their moment in the limelight and Z's full attention as observer, interpreter and motivator of each scenario. Nobody in the group seemed more than averagely troubled, none seriously neurotic and certainly not mentally ill but, by God, all those unresolved childhoods! So many early traumas hidden behind ordinary people's faces and perhaps never revealed until now. The simple technique of choosing two strangers who vaguely ressembled one's parents worked like magic. Having a supportive and absorbed audience for your mini-drama plus the charismatic presence of Z orchestrating it created an enveloping, secure ambiance where it was safe to unlock secrets and to show off whatever needed showing off.

I became totally mesmerised by each person's story, and by Z's stunning insights. I was picked to be 'mother' a few times, playing the role as my 'children' had experienced it. But you were supposed to decide when to 'work' (take centre stage) and I had almost forgotten that I had come for my own sake. It was only as the last session was winding up and the whole group was about to go out to dinner that I felt an irresistible urge to be heard. I got up and went to sit in front of Z and said: I want to work.

He looked at his watch.
Bingo!
Precisely the gesture my father often made when I was talking with him.
Z said: Do you always wait until the last minute to get attention? I nodded.
He said: Who's your father?
I said: You.
Z stood up, arms hanging loosely at his sides, head down.
He said: What do you want to do?
Without a moment's hesitation, I came to stand with my back to him, grabbed his arms and put them over my shoulders, bent down, hoisted him off the ground and walked around the room carrying him on my back.
Everyone laughed. I was (am) a petite 4'11". He was about 5'9" and solidly built. It was very funny.
Z said seriously: That's it. You're a carrier. Your parents jumped on your back when you were born and you've been carrying them ever since. 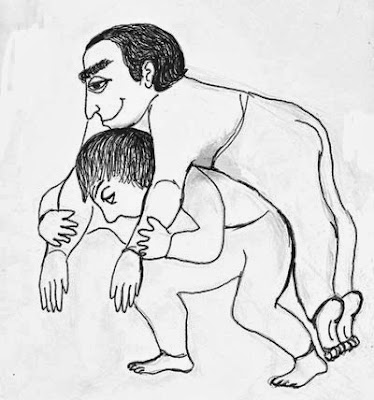 (I drew the above cartoon when I got home so I would remember the scene forever. I also sent it to Z)

Then Z said: Who's your mother?

Part Four is in preparation and will be posted shortly.

Quick as you like with Pt 4, Natalie! Yes, you can even shelve the 'TS' work. For a short while, anyway...

Dick, it has to be a short while - I have no desire to neglect TS!