It's hard not to voice an opinion on the crisis in Syria and the world powers' current stance concerning it but I'm resisting the temptation to add to the debates, at least online, though in conversation with friends I can't help saying what I think. I'm aware that my knowledge of the complex factors involved in the situation, being based only on what I read in the media, is so limited that any words I can say on the subject are about as much use to the problem as the meowing of a cat or the tweeting of birds and Tweeters. Therefore I'm posting more artwork to distract your attention from more serious matters, if only for a minute or two.

Here's another of the rough black & white sketches for the book, with one stage of the cut block lying on the table. The vinyl tile is about 2mm thick and quite bendy so the block is fragile because of its large open areas. But after it's been textured with gesso, I glue it to a second vinyl block which acts as backing and brings it up to the right height for eventual printing. The vinyl is quite resistant and cutting blocks with a scalpel requires a lot of effort - I wear a thin leather glove so as not to get sore between thumb and index finger where the handle of the knife rests. Stanley or other chunky knives are not suitable for intricate cuts. The second photo below shows the block upright. 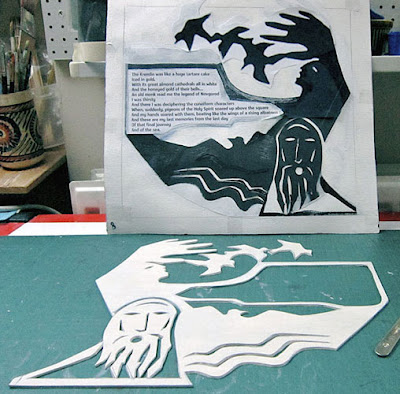 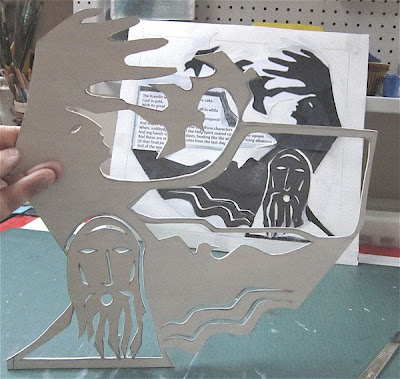 And now for some entirely different artwork. I did the little painting below a few months ago, working fast and loose as a break from slow, concentrated effort. As sometimes happens, such exhalations can turn out surprisingly well - this one's going into my Apple Series. 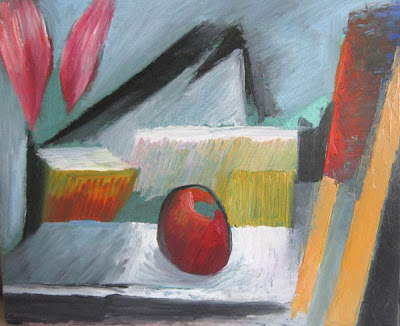 Another artwork, this one from a very long time ago: a portrait of my late ex-husband Reg which I painted in San Miguel Allende, Mexico where I first met him, when I was an art student and he was a teacher at the Instituto Allende (see this part of my autobiography). The portrait will soon be going to Vancouver where some of his grown-up children and grand-children live. It was painted in Duco, the industrial paint which was used at the art school and by many of the Mexican muralists. I like this painting, it captures Reg's personality, the sunny time and the enthusiasm I felt. 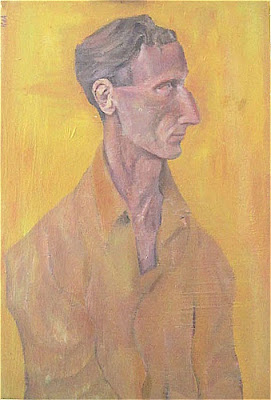 MORE
Posted by Natalie d'Arbeloff at 1:08 am

It seems that more and more, we in the West take military/political action almost for the sake of taking some, any, action out of frustration. Because the issues are far less clear than we fondly imagine them to be, it is a mmot point whether any action is appropriate. Yet still we talk about these problems. Why would we not?

Again, I find myself fascinated by your art processes. I seem to have seen that picture of your late husband before, perhaps in your autobio? I am intrigued by the fact that I can write much more about the earlier subject than I can about your art. Why is that? I ask myself.

I think in part it is because world news is so invasive, so 'in your face' and demanding of attention. One's head becomes sickly full of information, but not the kind that allows one to make right decisions. Your art, on the other hand, does not demand but requests our participation. It is therefore gentle and not fractious, invites questions and wonder and not anger and frustration. I look at your work and know how little I know, and that's fine. On matters of world affairs, we are expected (particularly in our democracies) to know and be capable of forming wise opinions on a minimum of real information.

Tom, you've hit that nail on the head. Anger, frustration, outrage, foreboding, suspicion, doubt, compassion, concern are some of the feelings which colour any opinions I might express about the news, but none of those emotions are of any value in bringing light, and certainly not solutions, to the real situations as they happen on the world stage. The truth is that we are uninformed spectators, safe (?) behind our screens and newspapers while, far away, others live and die in fear and pain.
Thanks for your remarks about my work.

Really delightful work here, Nataile! It was fun clicking on the apple picture and seeing it large.

Thanks, Peter. The apple is an endlessly refreshing subject to come back to, if looked at as if never seen before.

Is the Instituto Allende named after Chile's late president, legitimately elected and forced to commit suicide by the CIA? How ironic, if true. That the name lives on, and much nearer the US border.

Roderick, the Instituto was located in the small town of San Miguel de Allende, hence its name. So I don't think it was named for Chile's CIA-eliminated president. But there are, I'm sure, memorials to Allende in many places in Central and South America.

What's happened to your prolixity this time? I've begun to expect a gratifyingly long addendum from you to each of my infrequent postings.

You give me the opportunity to say something for the first time in my life "Natalie, I would be the perfect person to do these cut outs for you". Thank you for this.
I recognized Reg without looking at 'this'. It must be difficult for you to part with this beautiful portrait you created.

Dear Ellena, thank you so much for your interest and your offer, but I'm not sure I understand it! Are you planning to come and live in London? I have no space for a guest or a helper but if you happened to be visiting London, of course I'd be more than happy to meet you and show you what I'm doing. But it would be impossible to give anyone the task of cutting the blocks for me since I'm creating them as I go along. I may not have been clear enough in my description of the process: these are not like paper cut-outs but solid blocks on which I draw my images and which I change whilst developing them, and change again after I've proofed them in the press. There really are no tasks in this project that I can delegate but I'm very touched that you have even thought of helping me! Merci de tout coeur, mon amie.

Your happy apple lifts my spirits. I love your work.

Natalie-Dear
I continuously express myself in a way that can be misunderstood.
I just wanted to say that work with my hands requiring precision and patience is what I am good for since my retirement. If you were my neighbour I'd be honored to be allowed to help.
I looked for changes. Did you change the beard a bit and is the first fly away bird missing?

Hattie, and your comments lift my spirits too - thanks!

Ellena, you express yourself very well, sorry I misunderstood. It would be great if we were neighbours and within walking distance. Unfortunately continents and ocean are in the way.
You're very observant! Yes, I've changed the beard and one bird is missing from the block in this photo - but it will be glued on the backing block.

Natalie, I love your considerable talents at art and at writing.

Much appreciated, Bruce. Glad to have you on my side!

Dear Natalie, I left a comment using my phone only to see it disappear, an all-too-frequent occurrence these days! First off, I LOVE the vinyl cut-outs: they have the freshness of paper cuts yet you're doing them in this much more demanding material. So - bravo. And I like this apple painting the best of all of them so far. Sometime will you post a succession of pictures of your apple paintings? The Reg portrait too is a treat to see - I like the elongated treatment and the sunny palette very much. Like you, I am retreating into art these days, or perhaps it's better to say "choosing art," instead of allowing myself to be dragged emotionally into world politics. It's not that I don't care, because I care deeply, but my choice is my way of refusing to be a victim of these governments and their wars. I believe in life-giving energy rather than life-taking energy, and even if I were in prison I would try to continue that, as I'm sure you would too.

Beth, your comment hasn't disappeared, maybe it just takes longer to show up from the phone. Thank you for it all. I'm finding it hard to post more frequently though there are thingss I want to say but if I take time off from the book work, I start feeling guilty. Summer went by too fast and now the end of the year is zooming down the road...and I'm not ready!

Thanks Adam. And how are you doing?

Natalie, a bit slow but trying something new today. Will post next week I hope.
I found an energy booster compound that, after a month, seems to make a significant difference so I am trying to tear myself away from housework ha ha and do a bit of painting. Trouble is, renewed interest in photography is vying for time ...
It is good to chat with you from time to time.

Adam, that's great news about the energy boosting thing/nectar/food - whatever it is, take plenty of it and may renewed energy lead you wherever you enjoy going.