For a long time I've been used to a rather hermitic, if not hermetic, life and the presence of another person or persons for longer than a day, whether family or friends, regardless of my feelings for them, is something I have great difficulty in adjusting to. Being on my own has never been a problem. On the contrary, I need a kind of open solitude in order to function as myself. I've had lonely times of course - who hasn't? - but solitude is not the same as loneliness. Solitude is an ingredient as essential to me as air or food.

So this has been a difficult birthday week and in order to restore my own rhythm I went to see the Alternative Guide to the Universe exhibition at the Hayward Gallery. Big, bustling, pushy crowds are not my thing but those which amble along in leisurely fashion on a sunny day in pleasant surroundings are fun to observe and mingle with and conversations can be eavesdropped without having to join in - a pleasant way to be part of society without needing to be sociable. A bit like logging in to Facebook but not participating. 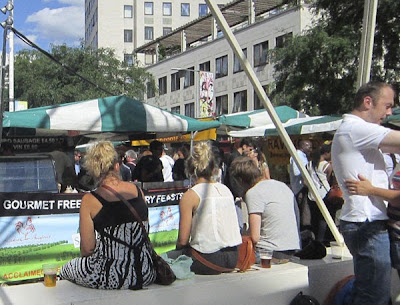 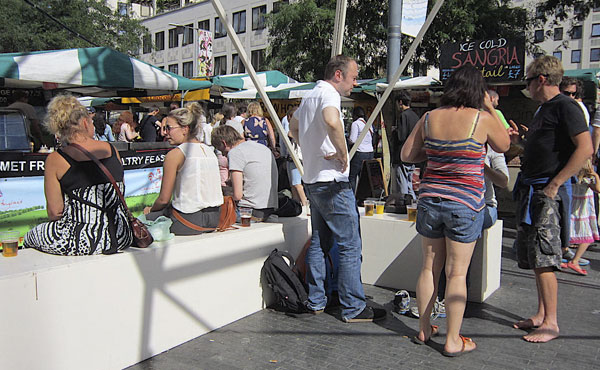 The South Bank is in the midst of a Festival of Neighbourhood and all sorts of things have cropped up which weren't there before. Those yellow banners for instance and the fierce animals and humanoid insect-creatures drawn on walls. I don't know who did them or whether they will stay permanently and I'm not not sure what, if anything, they have to do with neighbourliness but they are startling and intriguing. 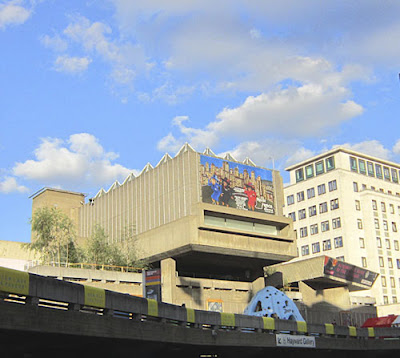 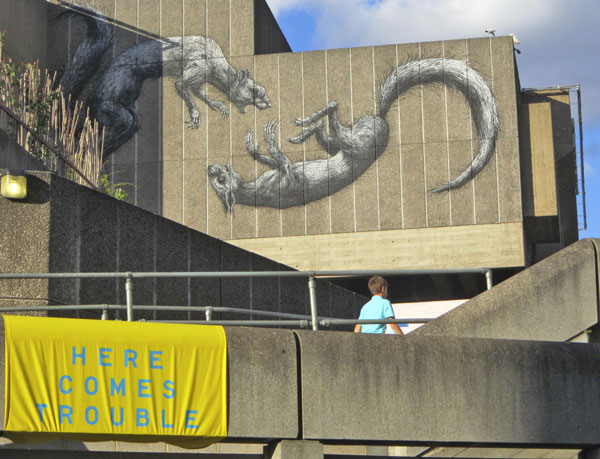 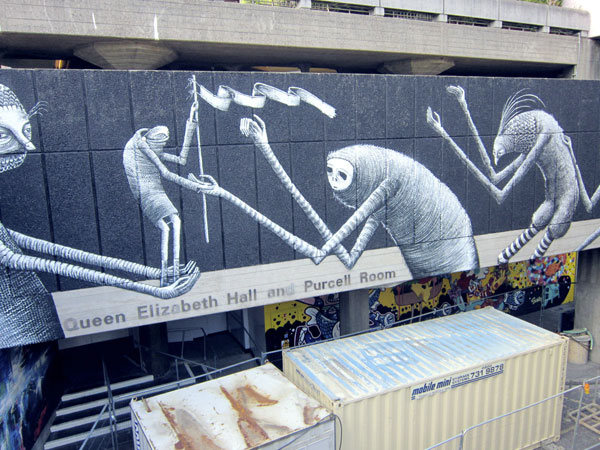 Inside the Hayward I began by going up to the level where the Museum of Everything is exhibiting a few works by the wonderful Nek Chand who, like Facteur Cheval, Simon Rodia and other so-called 'naive' artist-builders elsewhere, created an extraordinary magical world from recycled materials. You can see some of Chand's Rock Garden on this video and there's an interview with him here with subtitles in English. 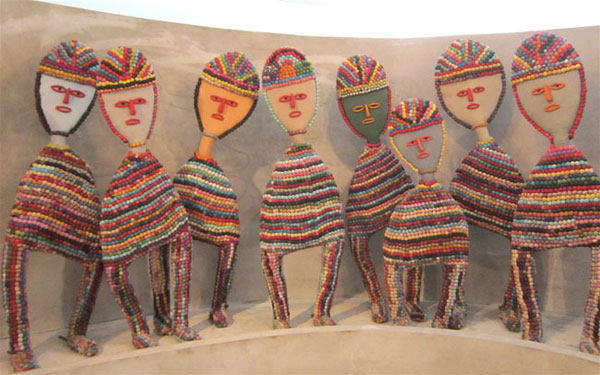 I've always been fascinated and inspired by such mavericks: artists outside art movements, DIY scientists with no academic degrees, inventors/engineers/architects without qualifications, thinkers outside the outside of any box, philosophers mocked by their peers for their far-out theories, visionaries, odd-balls - I love them all. And the Alternative Guide to the Universe exhibition is dedicated to them. I only managed to sneak a few photos but have ordered the book and there are good images and plenty of information on the internet about all the people featured in the show. If you're as intrigued as I am by Otherness, please be sure to follow the links:

BODYS ISEK KINGELEZ (some of his models are on the upper right in the photo below); GEORGE WIDENER (below left).

EMERY BLAGDON (one of his 'healing machines' is shown below).


UPDATE: Don't miss this wonderful video about Emery Blagdon, his life and work. 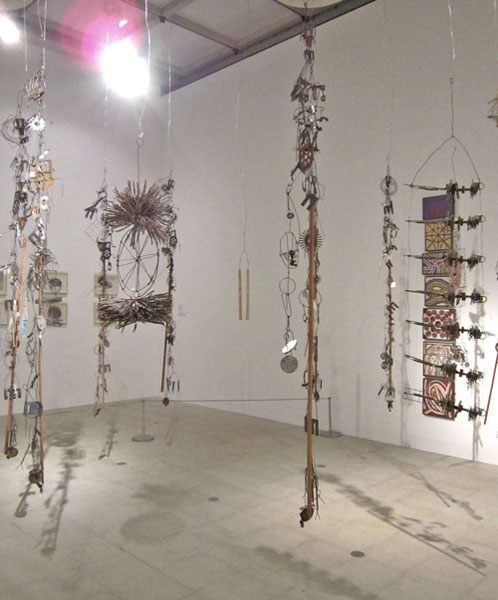 Below: two works by PAUL LAFFOLEY 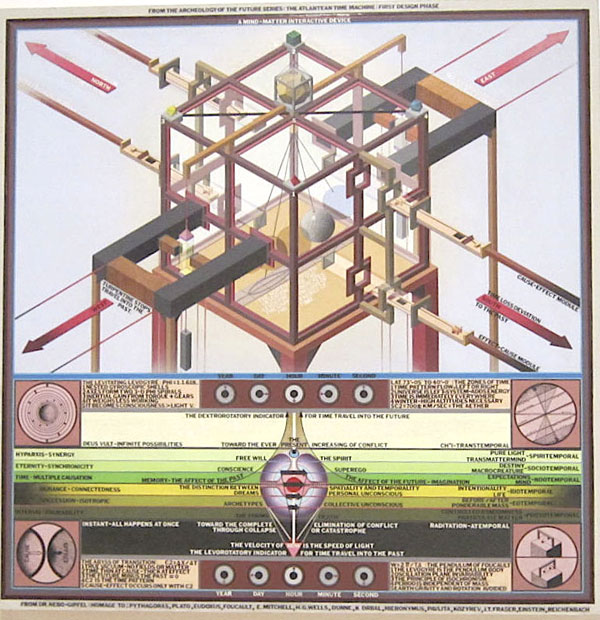 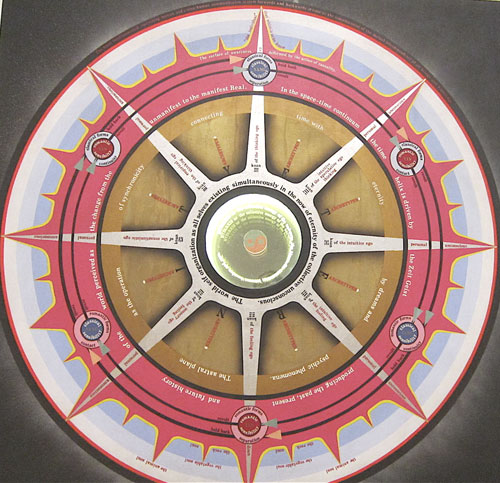 And there's MARCEL STORR and JAMES CARTER and many more but that's enough to distract you from whatever else you happen to be doing right now.

What interests me about these and similar outsiders is that whether they are as sane as you and I (hahahaha), a bit bonkers, completely bonkers, hypersensitive, autistic, visionary or any other classification you prefer, they all speak the same 'language' and explore the same kind of themes: cosmological, mathematical, patterned, symbolic, universal, sometimes mystical, none of it within accepted traditions and yet seeming to belong to a common lineage. It's as if a part of their mind is tuned to a wavelength beyond the reach of most minds, even very sophisticated, erudite minds. I don't think it's a coincidence that most of these mavericks are self-taught, if taught at all. Maybe their lack of sophistication is one of the factors which allows them to be antennae for whatever arcane messages the universe sends out. Of course any content they pick up and transform into paintings, constructions or words will be interpreted by their individual personalities and culture and thus may look weird, incomprehensible or merely charming to spectators. But I wouldn't dismiss it too easily.

And then I went home on the tube and saw this: 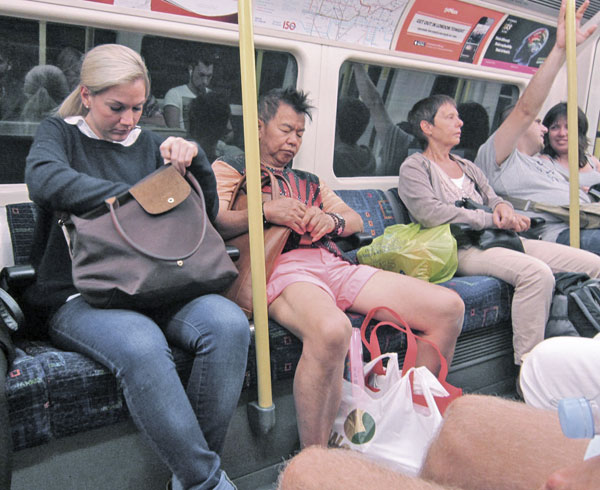 What an interesting road you chose leading to Own Rhythm Restoration.

Ellena, I'm glad you've come along and accompanied me on this walk, even if only from a distance.

Spectacular artworks, Natalie. Thanks for taking us along. I'm not sure about the picture on the Tube.

The more I see of this kind of work, the more I am convinced that it needs only to be viewed, without opinion-forming, and allow it to do its work deep inside one.

I was with you all the way in your first paragraph. Two point sseemed to stand out above the rest; the implied introversion (and what that really means) and the use of the word 'hermetic' - Hermetic?

Bruce, I hope you also followed up some of the links I gave? Not only for more images of some of these people's work but also about their backgrounds which is fascinating.
The weird picture I surreptitiously snapped on the tube - such a contrast to the orderly kind of strangeness I had just seen at the Hayward - was too good to resist.

Tom,I wholly agree that this kind of work is for absorbing on a different level than the intellectual/aesthetic critique one might apply to an art exhibition or even to a scientific exhibition. It's another kettle of fish altogether.
By 'if not hermetic' I meant that the dictionary definition: "Impervious to outside interference or influence: the hermetic confines of an isolated life" doesn't really apply in my case, even though I may be some kind of hermit.
However, the other meanings of hermeticism certainly do interest me!

The tube photo also puzzles me. It's underground travel isn't it?
Have not been underground in Montreal for a long time and don't recall any area looking like 1st class, seat-cover wise.
And, were you not afraid of the hairy monster sitting on the right hand side?
And, I would love to read stories told by people that were healed by
Blagdon's machine.

Ellena, yes, underground travel in London is a source of endless visual surprises. I often want to take photos and don't dare but in this case the strange fuscia-pink-shorts man was asleep and nobody saw me snap the picture. I didn't actually notice the hairy monster next to me.

As for the wonderful Emery Blagdon, I've just added a link to a great video all about him - please have a look at it, it's very moving.

Yeah, but somewhere there needs to be proof of discipline. Creative gushes are all very well but I always recall that salutary reminder for writers who dispense with commas and other so-called restrictions: easy writing = hard reading. Art is never easy otherwise there would be no distinctions.

Not that some of the works you show don't contain proof of application and organisation.

Roderick, one of the traits that characterise all so-called 'outsider' or 'naive' or self-taught artists/builders/inventors etc. is obsessive and focused discipline and the following of rules - but it's their own rules, obeying their own generally strange, off the wall vision. Creative gushing doesn't really apply to them, obsession does. I think the people you're thinking of are of the let-it-all-hang-out-everything-I-do-is-art type - not at all the same species as the 'savants' featured in this particular exhibition, as you can see if you follow some of the links which give much more information about them.

Thanks for adding the Blagdon video. What an interesting and loveable character this man was.
So many more on this earth that one could pay more attention to before it is too late.

Ellena, I'm glad you saw the video. I loved his bright blue eyes and childlike expression.
You're right, there are so many others that are ignored because they don't fit into the mainstream.

Natalie: The art and the people are wonderful. Such a treat to see these things.
I'm not sure "true" outsider art, or art brut, exists any more, though. What do you think?
BTW: I was just at the Modern Art Museum in Stockholm and saw the dearest Dubuffet, which I'm going to post a photo of when I get the time.

Hattie, glad you enjoyed my tour.
Real 'outsider' art is certainly alive and thriving in every corner of the planet. Have a look at the website of the 'Museum of Everything' which has done a lot in the past few years to show work of this kind in various countries.
Dubuffet, though I find some of his work really interesting, was really part of the art world and recognised as a 'real' artist whereas most of these people do not belong within that world at all.

What a welter of wonder. I'm especially drawn to Nek Chand's armless stripy people, and feel I would like to make some similar character myself out of something...

I hadn't connected the words 'hermit' and 'hermetically sealed' before. The other thing is something to do with Hermes Trismegestis I think, and an interesting coincidence.

Lucy, I can well imagine you creating some stripy creatures...maybe knitted? Or some other material. Life size? How about a whole Jardin du Paradis de Lucie?

Hermetic as in Hermes Trismegistus is very interesting indeed and harks back to my beloved ancient Egypt too.