A kind of blog paralysis has set in, mirrored by a cramp in my left shoulder and extreme reluctance to approach the computer. Why? I really really want to keep this blog running and I really really want to continue the autobiography and...and...and... It's as if there is a rebellious, sulky, jealous troll living inside me who is determined to prevent or delay anything I really want to do. I've sampled enough psychotherapeutic theories, processes and techniques to know that there may well be some buried childhood blocks which can still make me stumble and that ignoring them does not mean they disappear. But: an urgent need to distract, disrupt, delay.

Between writing the last sentence and this one I went in the kitchen, washed the dishes, made a cup of tea, read a couple of friends' blogs, checked my stats. I am definitely afflicted with Creatorius Interruptus. Talking of buried blocks, a buried Mickey Mouse was how I started the autobiography. I know I've left a lot of gaps, moved on too fast and interrupted too often but let's see if I can begin to fill in some of the blanks before taking up the thread that was left hanging when I stopped the story. Yes, maybe I can now continue in small chunks. Maybe even every day. Maybe twice a day. Let's see.

Looking at my life from a distance as if it were a map, it seems like a vast ocean with a scattering of small islands.The name of that ocean is Love and it is dominant, possessive, demanding, jealous, altruistic, egotistic, ecstatic, carnal, spiritual, all of these in constant tidal motion, wave after wave furiously or gently shaping the waiting shorelines. 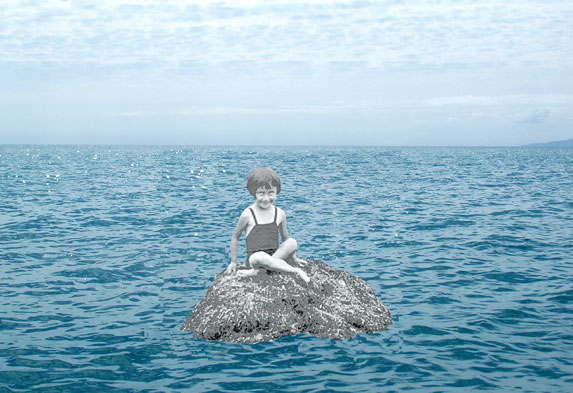 MORE
Posted by Natalie d'Arbeloff at 3:34 am

Let's consider ailments that no one ever talks about: they're just too unfashionable, too personal. too diminishing. Piles comes to mind and it would be even more of an affliction if we were all compelled to use and spell its more correct label - haemorrhoid (n. Amer: hemorrhoid). Which brings up another spelling nightmare, diarrhoea. And another: verrucca.

To this list should be added writer's block. But alas. There is nothing writers love writing about more than their inability to write. Whole novels have been devoted to this self-inflicted malady. As to movies any mention of a writer immediately results in someone suffering from intellectual paralysis. And you know what? - the non-writing but reading public finds it hard to be sympathetic.

Why? Let's imagine a novel in which a plumber suffers from plumber's block. Who occupies his time soldering bits of pipe which have no application in the greater plumbing universe. Wouldn't sell, would it?

I have re-read your piece several times. I can't be sure whether or not the Veil of Silence you invoke is a serious threat or just a form of titillation for your adoring readers. You talk about gaps and we're invited to imagine a pot-holed road; the local council may or may not get around to filling them in. It just depends.

What I do know is that the solution may lie in an alternating macro/micro view. Thus, to maintain the pathology metaphor you fall down on the way to some important appointment and break your leg (God forbid, Nat, God forbid. I'm talking exemplary fiction here.). During the treatment you find yourself suffering from an ingrowing toenail and the whole of the story is written from this discovery. Tragedy spelt out via minimal domestic detail. Want a Latin tag? I've got one: multum in parvo.

Or should you again be on the brink of another WB attack why not write yourself through the experience in the comments column of someone else's blog.

In many subtle ways that, which in this instance, is identified as writer's block affects our lives almost daily. I'll steer clear of the terminology (psycho-babble)I tend to use in such matters, but I suspect we know about the nature of the 'Great Attractor' which draws us away from doing that which we feel we need to do.

As for the picture, what a little sweetie! :)

Roderick, first of all I appreciate the generosity of your comments. A novelist who takes time to read and respond thoughtfully and lengthily to others' cogitations (blogitations?) - quite rare and very welcome! Even if it's your way of dealing with WB attacks. You encourage generous replies.
As I see it,the block is The Block, not exclusive to writers but obstructing or derailing every kind of constructive human activity - the Great Attractor that Tom hints at. I wouldn't give it horns and a forked tail but maybe a more Sci-Fi image? Whether it really matters to the universe that we write the novels, paint the pictures, run the races, do the plumbing, the gardening or the blogging etc. isn't the point. And whether we're any good at all those things isn't the point either. The point is that the urge to create, make,mend,communicate, discover, take care of and so on is what gives our lives a point. The Block is the opposite, that which says: "What's the point? Don't bother."
By the way, a novel about plumber's block sounds like a great idea to me and it would sell. Get started!
Meanwhile I must start filling in those gaps.

Tom, I didn't mean to answer your comment in replying to Roderick's but it seems that I've more or less done that.
But the subject of the Great Attractor hidden in the term writers' block and words such as doldrums, apathy, inertia, anomie etc. is one that I've long felt deserves investigation in a non-traditional manner.It's something that we all experience to greater or lesser degree all our lives, as you say, but really don't know how to deal with very well. Psychology and psychotherapy have undeniably made great advances but, in my view, the jargon often leads to more jargon rather than to direct experience.

Glad you liked my photo - it's how I still see myself!

Natalie, that's fine. Glad to have been able to supply some wherewithal for your use.

Don't ever forget that you are a wonderful person.
I adore the picture.

Tom, wherewithal is always welcome and yours is especially intriguing.

Hattie, I think I'll print that in large letters and put it on my screen: I AM WONDERFUL.
Thank you!


Ah Natalie, adrift on the sea with its strange currents, deep-sea creatures large and small, always dolphins to move us, emotions, thoughts, feelings (gut feeling), memories, plans, wishes, deeds, actions, big raft and small paddle, where have we come from where are we going? did Stevenson have it right that it is the journey that matters? of course he did. Where do plans come into it? How can we navigate? How can we propel ourselves, in what direction?

Lethargy is my enemy - too easy to just slump back. But I do enjoy it when or most usually after I have made my little effort. But that is just me.

You look like that mermaid in Copehagen, but your legs are the wrong way.

Keep posting Natalie, you throw out the threads that we knit together into relationships, without which we are nothing.

Fact bite: R L Stevenson and Gaugin were contemporaries, both headed for and ended up in the South Seas. Wonder how they would have got on together?

[Diversion: a bight of rope is "the bit between the ends"!]

Adam, they probably did meet -it's a small world out there. But also too gigantic - the water's so deep and so many currents are pulling in different directions. Many thanks for your riff on the theme - I like improvisations!

The people who worry most about their lethargy always seem to me the ones who have least to worry about, but then that's seen from the outside of course.

Anyway, I totally concur with both Hattie's sentiments, that picture makes me smile and smile.

Lucy, h'm....that may well be true...but The Block, the Block! How to kick it away? Glad you like my early impish self; I like her too.

I had posted a comment 2 or 3 days ago. No idea where it is visible. In a way I'm glad it's lost. The word infinity had come up again. Now, getting to our blocks. Some of us are lucky to be able to kick it/them away - gone. My block is related to me having been attached to a short leash for too long. It does not have a fancy name like all of yours. It's name is restriction and blocks many things I want to do.

PS
Nathalie, I answered your comment on my July 7th Post in an odd way and am not sure if you saw it.
I wonder if I should tell my doctor about the odd things I do.
I recently went into a store and as I was browsing around a clerk asked what kind of car I was driving. I had left the door wide open after clicking the button that locks it when I bang it shut.

Ellena, I did see your comment about a green infinity and I replied. Don't worry about misplacing anything - eventually everything turns up! And don't worry about 'odd' behaviour - odd is interesting. But of course the car door should be shut, etc etc. Absent mindedness is considered the priority of professors and artists so you are probably both.