Working every day drawing and cutting blocks for the Trans-Siberian book project, often I lose track of time altogether. A measured work/rest/play balance isn't really my thing, especially since the work I do is also play, even when it's hard and demands a lot of wrist action. But this week the weather became more like it's supposed to be in June instead of an imitation of March which itself was more like December. So I decided to take a break and actually Go Out into the sunshine and the world beyond my window.

To Tate Modern by my favourite route, taking the underground to London Bridge and then walking at a leisurely pace past Southwark Cathedral and through the apetizingly odoriferous Borough Market where all the food steaming, simmering, frying and bubbling looks and is too delicious to make a decision so I can never decide and end up only having a coffee and sandwich at the dull Tate snack bar. But on the way to the gallery, through the tunnel and along the embankment, I took some photographs. 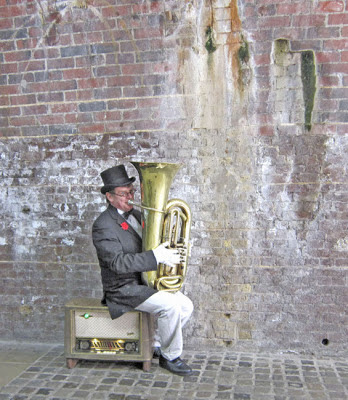 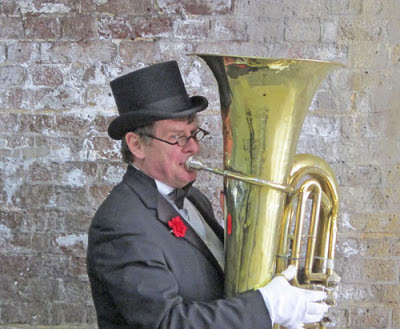 Fake flames were shooting out of the busker's tuba and I suspect that most of the music was coming from the tape recording he was sitting on - such an incongruous and jaunty figure against that distressed wall. 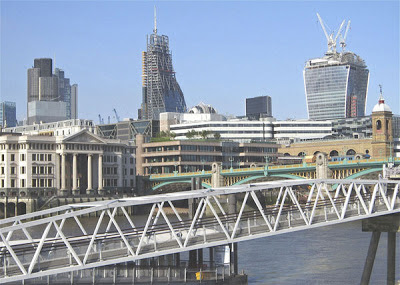 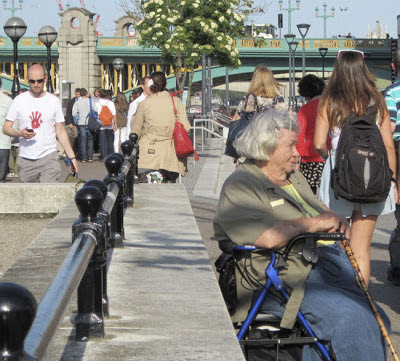 Sitting alone in the midst of the ceaseless stream of busy strollers, this thoughtful and kind-faced old lady moved me deeply. 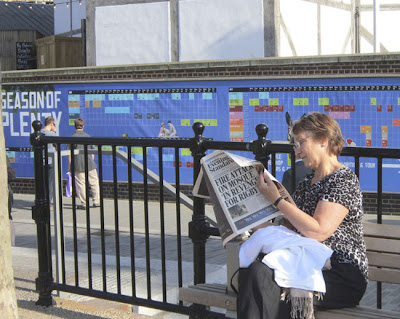 In front of Shakespeare's Globe Theatre. The world's a stage, it's a Season of Plenty and all the tragedies and comedies are played over and over again every day.

I'll be back very soon to re-start the autobio, yes I will.

Such pleasing pictures that I'm going to overlook your neglect of the Great Work!

Of course I was born in and grew up in London, and worked in the City for two years. That was in the days when it was virtually a continuous bombed site from Cannon Street/Queen Victoria Street to the Thames. When I visited that part of London last year - when I came over for my annual ears-and-eyes mot - I was amazed at the development and all the cooked food for sale. Southwark cathedral and that general area was great. Your pictures have brought all those lovely memories flooding back.

Dick, the Great Work is monopolising my mind, my hands, my home and my sleep so don't worry - I think I'm channelling Cendrars. Thinking of you and sending powerful good vibes for next week.

Tom, next time you're in London let me know - we can sample all the delicious foods on offer at Borough Market and I can hear about your early years as a Londoner - that would be a treat! Indeed the changes around that area, and other parts of the City, are truly astonishing. I've only been a Londoner since the 1960s but it's changed hugely since then.

It's a deal I look forward to it.

That tuba man's giving you the eye!

I was suffering from a bout of Anglophobia, but I am now longing to be there. It is the home of our language.
I hope your project goes well, but of course you need to catch a few rays, as we say in my country.

London looks lovely as I glance at my thermometer reading 108 degrees here in Scorching Arizona.

Lucy, I think his eye was fixed on the coins that were dropped into his plate, calculating whether there would be enough for another pint.

Hattie,come on over! You'll enjoy the English that's now spoken, spiced with all the other languages, dialects, slangs and trends that have modified it. The old BBC-type accent is more or less extinct (apart from the elder Royals).

Bruce, I remember the Arizona heat! I spent a short but wonderful time there in the 1970s at a place called Nada Ranch (it no longer exists). Did you ever hear of it? It was a kind of retreat place.

Great pics and a fine excursion, Natalie. Good to meander along and see what is to be seen.

I was in London in the early '60s! Amazing that we did not meet :-) Then we went off to Africa ... then Australia, never to return.

Flames? Shades of the punk bagpiper on Australia's Got Talent with his flame-thrower drones (I saw him on Youtube once).

Adam, I've lived in North London the whole time I've been here - maybe you didn't hang out in the area?

Dominic, this busker's flames were more like some kind of joke electrics built into the tuba but his face was quite red so whatever it was must have produced heat.
So there's a Got Talent in Australia too?

We're also getting a bit of June, appreciated even if belated. The city doesn't seem interested in filling the wading pool in the park. There's a good risk that it might freeze over.

Thanks for taking us along on your shoulder as you meander. I'd certainly help you make a buying decision in the market! Sounds delicious.

Jonathan, decisiveness is what's needed in that market. Put it on your To Do list for next time you're in London and we'll go there.

The two books arrived today, hurray!
I'll be back after having read.
The little 'La Vie en Rose', 5.2x8.3" was wrapped in bubble plastic and taped onto a 12x14" cardboard which was placed into a box 12.6x14.5x1.5".
Amazing package with the book safer than a baby in a womb.
And, I'd love to stroll the streets of London.

Ellena, they certainly overdo the packaging, I agree. I'm much looking forward to your impression of both books - many thanks for ordering them.

Come and stroll the streets of London with me - I'd really enjoy that!