A COLD IS NOT A COLD AND TV OVERDOSING IS DANGEROUS

Laid low by that thing called "a cold" which is actually a slap in the face, a kick in the gut, some well-placed punches to nose and throat and a bit of eye-poking. Whatever measures you take to get rid of this agressive viral squatter, once it has occupied your premises it will happily guzzle all the Lem-Sips, hot toddies, cough syrups, echinacea and whatever else you consume in self-defense but it will not leave until it's bored and decides to hunt for another innocent victim. What the tiny thug likes best is wrecking well-laid plans, so my train ticket is in the wastebasket along with my anticipation of a fun day of drawing with a group of other artists who met up (without me) for a Portrait Party in Oxford on Saturday.

Doesn't it look just like it feels ? This is an image of the Cold Virus from here . 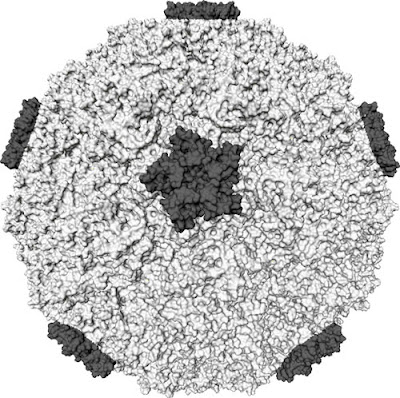 Since most of my energy is blown into tissues every few seconds, work on the Trans-Siberian images has been interrupted and even reading feels like too much effort. Music doesn't penetrate the fog and the computer is too demanding, so sleep and/or televison are the remaining options. Normally, I rarely turn on the tv except for the evening news and maybe an occasional film, but in the last few days I've overdosed on tv at all hours of day and night and this, I'm sure, is how total brain removal is achieved.

Your own mental content is pushed out and replaced by an unceasing stream of innumerable other people's mental content while you sit there hypnotised by the flickering screen. Some interesting, intelligent, informative, amusing things flicker by along with various degrees of idiocy, banality, violence and perversity but the flow of images and sounds doesn't differentiate between them anymore than an ocean differentiates between sailboats and sewage.

I can't prove it, but I'd be willing to swear that the more time is spent in front of a tv screen, however worthy the fare, the more creative energy and originality is drained out of one's consciousness. I suppose the same thing could be said for sitting at a computer screen all day, or staring at any of the other digital gadgets feeding our brains visual and auditory information 24/7. Have you noticed the glazed, zombie-ish expression on the faces of teenagers, as well as pensioners, or any age group in between, who spend a great deal of their time staring at screens, be they small hand-held or wall-sized ones?

Anyway, it's only taken me all day to write this little blogpost so all is not lost. I will get on with getting on with the autobio, yes, and with Trans-Sib, of course. Give me another day or two to exterminate the woolly, creepy, sneaky, mushy, malfaisant, Machiavellian "common cold" and all will be well.

Natalie: What I peach of a post. Perhaps I shouldn't say this, but the self-pity you have brilliantly expressed is worthy of an Oscar. I do hope you get well soon, even if it does mean we'll receive no more posts like this.

Tom: well, thank you - if it makes me a blog Oscar winner then I'm glad I was caught by this cold. It seems such a particularly vicious one that I have to commemorate it somehow. But I'm feeling better already.

Hi Natalie - I'm glad if you're feeling better but it sounds as if you've really been decked by the miserable creature. The thing looks like a giant popcorn ball with colonies growing all over it. I hope it's out of you soon

All hopes for a swift ejection of the tiny thug - or thugs, since clearly they're mob-handed. And embrace the tele - it's there for the recumbent sick and no shame comes from the indulgence.

I too have been somewhat encoldened, but have resorted to plugging myself into Radio 4 podcasts and knitting. Trouble is I have progressed in no wise with this because I am too thick headed to count properly, and have had to unravel the project at least twice, once because it was all floppy and once because, knitted on a circular neeedle, I found, some way along the line already, that what was destined to be a sweater had become an irredeemable Mobius strip.

I've also distracted myself by browsing other people's more successful, though not always more aesthetically pleasing, creations on Ravelry; I have to say the cold virus does remind me of a rather repugnant crochet doily. Perhaps that would be a way to commemorate the viruses that lay us low, make fibre art representations of them...

Anyway, sorry you missed the drawig trip, but glad you're feeling a bit better!

Poor you, Natalie. Bad colds are so really, really horrible. Take good care of yourself and feel better soon.

Many thanks, friends, for your concern.

Jonathan, yes, this miserable ball of crawling wool is probably the nastiest one of its kind ever to creep into me. But today there are definite signs that it's on its way out.

Dick, the tele hasn't been turned on at all today and I actually Went Out for the first time in 6 days, if only to get groceries around the corner. So I'm almost human again.

Lucy, so sorry it got you too! But I hope your virus might be scared off if you knit its likeness? Something ugly in wool or crochet is exactly what the bugger looks like! I'm not a knitter but I can imagine that it must be a great way to cope with life's unwelcome surprises, as well as being a fun way to relax.

Jean, I think it's the echinacea that helps. I was about to take one of those strong cold remedies but when I read the list of side effects I decided not to risk it. Bad enough coping with the bug without additional
torture (if anything has side effects, I'll get them).

I had that cold, too, and it was awful. You will be OK, though.
I like your comparison of TV with an ocean that can't tell the difference between a sailboat and garbage!
Get well soon!

Hattie, I now think it's not a cold at all but some kind of flu virus. It's still hanging on but I should be ok in another few days. Thanks for coming over!