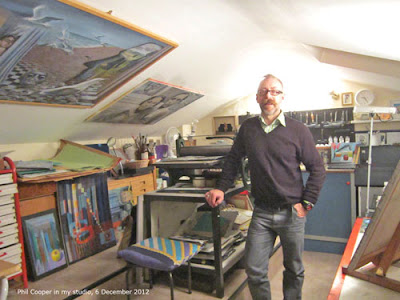 MORE
Posted by Natalie d'Arbeloff at 3:48 am

Glad about the friendship but sorry about the knees!

Like Dale said, Natalie. And there's certainly something in your notion of inner-to-outer, if only in terms of the emotional temperature within directing external actions and their consequences.

Looking forward to our gathering.Finally we settled on a date!

Yow, hugs and hoping you are feeling recovered from the fall, Natalie. I completely share your suspicion that a negative or weary state of mind can make you more vulnerable to accidents - this definitely happens to me :-(

I like Phil's work a lot and look forward to exploring more of his site - thanks for the introduction.

Thanks Dale, I wish I could have gone straight to your practice for a restorative massage!

Jean, my knees are still a bit sore but that's all. Glad you've connected to Phil's blog; he's a recent arrival to the blogging world and deserves attention.

Sorry you'd had such a crappy day on Friday, and yep, I'm the same, if my mood is simmering anger then that's when I have an accident for sure or drop the £20 note I just took out of the cash point or break something.
So good to see you for tea and a proper chat, thank you for showing me some of your extraordinary work, that studio room is a magical place! - travelling home reading a copy of ''Hindsight' suffused my evening with a deep glow. Hurrah for the blogosphere, it's been great to meet you Natalie, you're an inspiration

Hi Phil, it seems many of us have experienced the phenomenon of reality aping our inner states! Somebody somewhere should do research on it...if it isn't already being done.
I very much enjoyed your visit too and am looking forward to seeing your next artworks and of course, the Alphabet series completed.

And thanks for introducing his collages to the blogosphere, Clive.

!! that one did ... now I've forgotten what I said before on the lost missive ... never mind, best wishes, Natalie.

Lang may yer lum reek, as they say in Edinburgh.

Adam, no problem with your comments arriving here. I've removed all barriers so I hope they're still not hassling you!
Thanks for the good wishes; hope you're okay.