Today it is exactly eleven years since my mother Blanche died. I've written about her before and some of you may also remember a slideshow I posted of a few of her paintings.

It seems that the universe too wants her to be remembered since I recently heard from Henry Boxer, a dealer in naive and outsider art, who had shown interest in her work about three years ago. He has finally included her on his website - you can see the page on her here (he says extra images, titles and dimensions will be added later). Of course I'm delighted that her presence on the internet now extends beyond my site and I'm hoping it might lead to recognition of her late-life blossoming as a painter.

It was only in the last four or five years of her life (she was 97 when she died) that she took up painting with a verve and talent I'm still in awe of. But in the mid-eighties she came for a short time to the etching classes I was teaching at the City Lit Institute and produced a few images that, objectively, I consider to be as good as some created by modern masters. I could never convince her that what she saw as her 'failings' were qualities which many highly-schooled and sophisticated artists struggle to achieve. Here are two examples of her first etchings/aquatints. 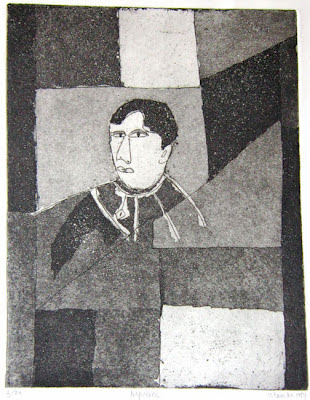 And here's a sketch I drew of her a long time ago, when my parents were living in Putney, Vermont. 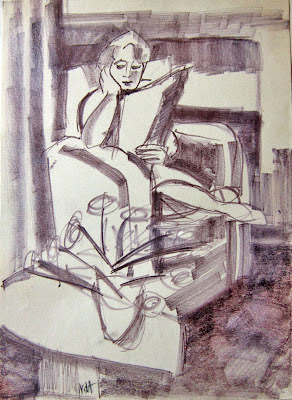