AND ON THE SEVENTH DAY...

Today, the seventh day of my first 7ism work, herewith my report and results.

Decided to start with something small and insignificant so I chose to make an improved version of my stop-motion animation NOT a celebrity, the first rough cut of which I posted here last month. Since I declared then that I was definitely going to improve it, this seemed like a good way to test the 7ism movement's effectiveness.

My usual approach is to declare that I am going to do something, then put whatever it is on the shelf (virtual or literal) with all the other things I have declared I am going to do in the immediate future. In my vocabulary, the word immediate is elastic and infinitely stretchable. Unfortunately, reality doesn't understand my vocabulary. Hence the pile-up of broken declarations, which 7ism is going to fix. I hope.

I began at about 2:30 pm on Tuesday, November 8th. The first requirement was to devise a more efficient arrangement to hold the camcorder. A book I have (Get Started in Animation) includes a diagram for building a simple copy-stand with camera mount. While the plan is perfectly feasible, I didn't want to spend too much time on this so I opted for improvisation, my favourite modus operandi.

An old portable easel was given a new function which you can see in the photos below. I pushed the normally vertical canvas-supporting arm into horizontal position, adjusted the legs to the needed height and tightened all the bolts. Then (here's the clever bit) I took one of those tiny tripods available in any camera shop, put its legs together flatly and taped it down firmly to one end of the easel's horizontal bar. The camcorder could then be screwed into the reclining mini- tripod, allowing the camera lens to point straight down. I attached a cable to connect camera to power socket and a Firewire to link my Mac to the camera (I'm using iStopMotion software). 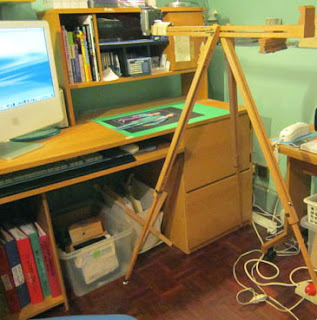 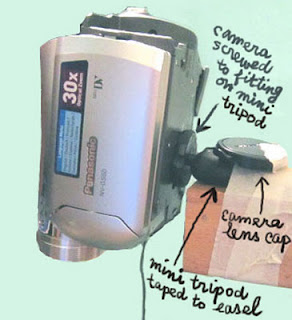 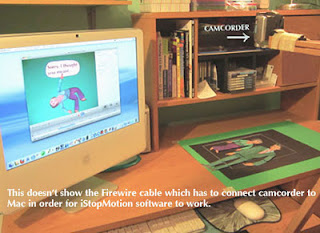 The above photos were taken in the downstairs study where I ended up making the third and final version, but I first set up the rig in my upstairs studio. By the time I was ready to shoot, daylight was gone and I had a lot of trouble positioning lamps even when using daylight bulbs. Version Two was a big headache (literally) for many reasons but I learned a useful lesson.

When something doesn't work because I haven't prepared well enough, my usual tendency is to keep nagging away at the faulty item until I've knocked it into some kind of unsatisfactory order, even though a much more effective solution would be to start from scratch. I went through my old routine in the second version and wasted several days painstakingly re-drawing frame after frame of a whole sequence because I'd filmed it too close and some of it was out of frame. The obvious answer was to re-shoot it. But no, I had to be the masochist.

However, because this was a 7ism project and I was committed to it, I then threw out all those files I had so obsessively been re-doing, re-uploading and... well, you don't want to know every twist and turn of that winding road....decided to do a third version. That's when I moved everything downstairs.

Finally here are the two versions of NOT a celebrity my seven days produced. The animation is still not even close to perfect but I'm satisfied with this particular project and pronounce 7ism a success in enabling me to finish something I probably would have abandoned.

All comments/criticisms etc. are welcome.

THE SECOND VERSION is here on Vimeo and also on YouTube

MORE
Posted by Natalie d'Arbeloff at 4:59 am

A wonderful Paxman - and a chilling dalek extermination at the end!