Everything visible, no matter how familiar and ordinary, can suddenly seem miraculous when the eyes and consciousness home in and absorb a scene, drinking it in like a bee feasting on nectar. Astonishment - better expressed in French as emerveillement (making marvellous) is the key to creativity and maybe even to eternal youth. Forever amazed - that's my motto and goal.

The movie option on my new camera gives me a perfect tool for recording random glimpses of activity that delight me by their rhythms and patterns. Here is a video-collage, combining the rain walkers in Trafalgar Square, a street performer below the National Gallery, and a magic instant in Salisbury Cathedral a few days ago.

I had a dental appointment in Salisbury last Thursday - why, you may well ask, make an hour and a half train journey to a dentist in another town when there are so many dentists in London? The reason is too boringly dentally technical to go into but anyway, I've never been to Salisbury. So, after my dentist appointment, I wandered through the charming town, ending up at the deservedly famous cathedral. Its serene majesty is enhanced by the tranquil bucolic surroundings in which it stands. The giant spire (123 metres/404 feet) is like an arrow straining to break free from the ground and zoom up to the stars. 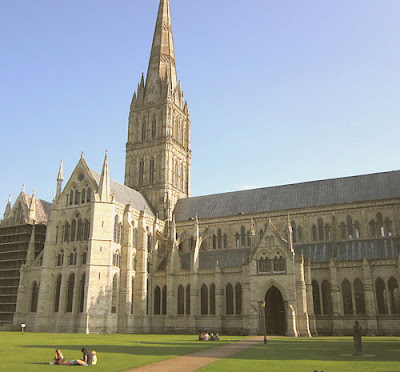 Astonishing to me were the contemporary figures by Sean Henry unexpectedly scattered outside and inside the cathedral. This is a temporary event titled Conflux, a union of the sacred and the anonymous. I didn't know anything about his work and was impressed with it, although the shiny plasticky varnish that most of the sculptures are coated with is offputting. I took a few photos but there are better ones here. 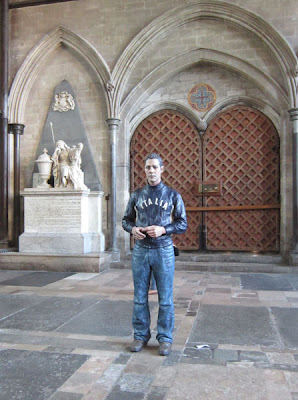 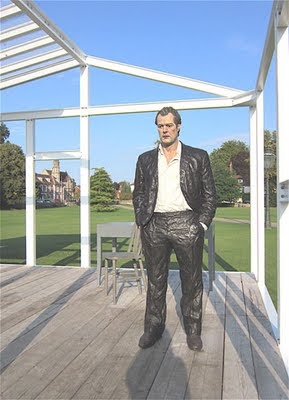 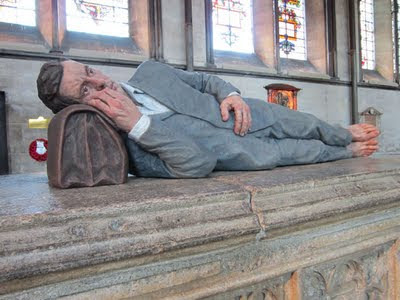 MORE
Posted by Natalie d'Arbeloff at 1:09 am

Those sculptures in that place would be pretty striking.

Reminded me that we went to Kettlewell Scarecrow Festival the other week. Villagers make scarecrows/effigies and stick them outside their houses. There were some in the pews of Kettlewell Church. They was oddly offputting - and sometimes hard to tell from the real people sitting there!