MORE ABOUT MY FATHER: Part 3

To give you some idea of how Sacha's concept was presented to the students, I've done the rough sketch/montage below but it's nowhere near accurate. Why didn't anyone think of keeping a photographic record of the whole experience? Too busy, I guess. 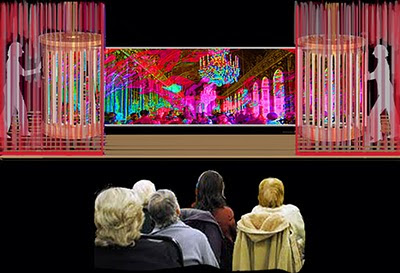 My father had gathered an enthusiastic team of volunteers and everyone pitched in with ideas and work. Two giant wooden spools were built by a local carpenter and a very long roll of canvas was wound around them. With the spools positioned an appropriate distance apart, mounted on spindles and rotated by two people standing at either end, hidden by curtains, the sequence of images painted on the canvas slowly unrolled before the audience.

The students - no more than about five or ten at a time - sat on high-backed chairs in one of the large, beautiful rooms of the house. In dim light, a recorded narration and music were played, paced to match the unwinding canvas. A film, without film technology. There were no computers, no PowerPoint, no DVDs or CDs at the time but the performance was all the more intriguing for being so low-tech and DIY.


Where is that recording of the House of Contrasts script? I don't know, but I do have a copy of some of the text. Where is that huge roll of canvas? Possibly in Rome, in storage, unless destroyed. And who painted it? Um...moi...with slight assistance from an Italian multi-media artist and conversationalist.

When I first walked into the Villa Ulivi, I was astonished by the buzz of creative activity. My mother and little brother had arrived from New York as well as several relatives from France, recruited to help with the proceedings. There were also the Italian crew and of course my older sister Annie (autobio P.16) a key player in my father's scheme. Annie was working at the time for a student travel company in New York and it was she who organised the visits of students to the House of Contrasts, as well as taking them to meet leading personalities on the Italian cultural scene. There she met her future husband, the writer Gerardo Guerrieri, but that's yet another story.

My main role was to illustrate Sacha's Dante-esque script on that huge roll of canvas but I had insisted, even before seeing it, that I would need help. So my father found and somehow - unbelievably - managed to persuade a very busy artist/architect/designer to be my 'collaborator'. This collaboration was the most enjoyable I've ever experienced but it consisted almost entirely of talking.

Before coming to Italy, I did not know that talking could be an art-form or that a mere verbal exchange could be a performance, with all the colour, magic and mystery of opera. Or that it could actually be a substitute for action. All Italians can talk this way but some are more gifted than others and Giorgio was a genius at it. I don't remember a word of what we talked about but it must have concerned the task we were supposed to be working on. Did Giorgio ever apply brush to canvas? I don't remember that either but he did have great ideas.

The canvas had to be ready for the first presentation of the summer and Giorgio was very busy with his multiple activities so I found myself inevitably and urgently responsible for covering that six-foot tall and endlessly wide ribbon of canvas with interpretations of Sacha's verbal panorama of hellish and heavenly stereotypes. I think I used a lot of red and black in painting the hellish and a lot of pastel hues for the heavenly but apart from that, don't ask me what the finished work looked like because it has entirely escaped my memory.

What I do remember nostalgically was the table at mealtimes. There were usually at least a dozen people around the long, chunky table and much laughter and animated talk while huge bowls of pasta and fresh green salad were devoured and glasses were refilled with the local wine. Outside on the stone terrace small green lizards dozed in the sun. My little brother loved the lizards and imitated their shy, watchful concentration. Here he is at that time, making like a lizard at Villa Ulivi, the House of Contrasts. 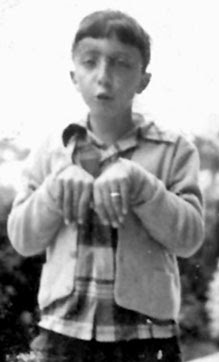 Posted by Natalie d'Arbeloff at 4:51 am