I THINK IT'S FINISHED

Unless I see something else that needs changing (and I may) Frames of Reference (formerly known as Prism, formerly known as My DNA ) is done. Here it is along with a close-up of the top left-hand corner where I've painted a version of the whole snapshot of my parents which was the basis for the two central figures.

I believe this painting is about different dimensions of space and time and maybe multiple universes but any and all interpretations are welcome. 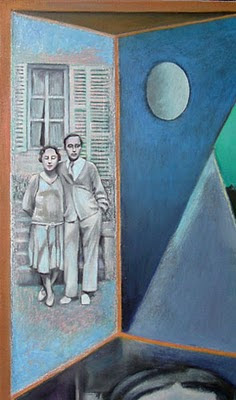 Posted by Natalie d'Arbeloff at 7:30 pm

I love how the painting opens up a seemingly endless depth and a complicated world beyond the surface, as if the people in the picture were only the curtain, beyond which the drama unfolds.

Maria,that's it exactly. The actual story is somewhere behind the surface. That's why it was so difficult to reach a point when I could say: enough, stop right here.

What Maria said. And I've been reading you long enough to have an inkling what the pyramids are doing there!

Dave, well the pyramid certainly harks back to ancient Egypt but in this case it was also inspired by an object in my studio: a construction I made some years ago featuring a mirror-surface and an image of my father reflected in it. It was pyramid-shaped so again, my supposed past life comes sneaking in!

Thank you, Loren. To inspire inspiration is my goal!