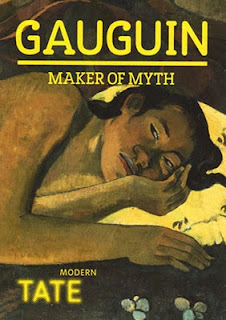 I had booked early for this show, hoping to transform my indifference to Gauguin into enthusiasm. I've seen his paintings in museums here and there and of course in reproductions - his art seems made for high-tech printing, looks great in coffee-table books and on posters, cards, scarves, bags and baubles such as those currently adorning the Tate Modern shop. But I don't think I ever saw a comprehensive collection of his work gathered in one place so this was an opportunity to lose my immunity to his universal appeal.

Keeping eyes wide open, I amble respectfully through the galleries, stopping for long reflective pauses. The background story I'm familiar with so I ignore the big wall-captions and never ever opt for portable audio-guide - no matter how informative, I don't want somebody's voice interrupting my own impressions. I need to have silence in my head to allow the work itself to speak to me, unmediated, if it's going to speak at all.


One thing immediately creates a barrier between the painting and the viewer: those frames! Those ornate, overwrought, overweight, overprotective gold frames - why why why do museum curators still think they must burden modern paintings with these antiquated trimmings? Do they think that art won't seem like great art to the public unless it's got ten inches of baroque chocolate box icing around it?

Never mind the frames, what about the work? Am I dazzled, excited, inspired? Well...yes and no. Gauguin's prints, woodcuts and wood-carvings are marvellous - the craftsman-artisan in him is at ease in solid media, materials he can cut and gouge and smoothe and polish. In many of his drawings there is the same sense of inhabiting the medium, neither dominated by or dominating it. Noa-Noa is a masterpiece. But put him in front of a canvas and Gauguin becomes self-conscious: he's got a message, he is an illustrator, a decorator, he makes pretty patterns out of a pretty setting. I go back and forth in the rooms, absorbing different periods of his work, but only four or five paintings escape the shocking conclusion forming in my mind that, underneath the bohemian runaway rogue artist with his hat and cape and exotic teen-age vahine, a conventional, bourgeois banker is trying to get out.

Compare Gauguin to Van Gogh - I'm sorry but I have to make that comparison - and the difference is obvious. Vincent loses himself in the subject he chooses to paint, he is entranced by it, his technique is entirely at the service of it. All that he has learned about colour and form sits before a tree, a field or a person and humbly offers itself, like a lover. I'm yours, he says. Every drawing and painting is for Van Gogh a love affair and the pen or brush caresses the love-object, coaxes it to reveal itself.

For Gauguin painting is not such a visceral, intuitive experience. He's attracted to the picturesque, the exotic, and uses elements of it to construct a mythical scenario. He has an agenda. 'Maker of Myth' is an apt description of the man as well as the artist. I think that when Paul came to Arles, finally giving in to Vincent's lonely and hero-worshipping entreaties, he must have been stunned by the work Vincent had produced. Gauguin was sensitive enough to realise that this work was something unprecedented and perhaps he knew in his heart that it was far beyond anything he himself could have created. Of course this is just conjecture, but my feeling is that his pride couldn't allow him to admit this and the famous Gauguin/Van Gogh fight and ensuing ear-slicing incident was an explosion of these undercurrents - Paul's envy and competitiveness, Vincent's disappointment that Paul had not expressed the appreciation of his work that he had hoped for.

So, am I glad I saw Gauguin at Tate Modern? Absolutely. Do I recommend this show? Definitely. Did I lose my immunity to Gauguin? No, apart from the prints and wood-carvings. 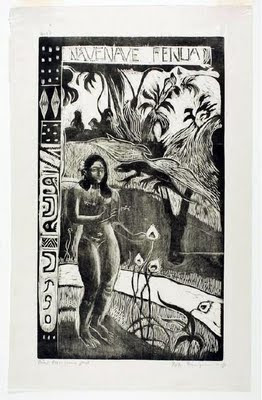 MORE
Posted by Natalie d'Arbeloff at 4:43 am

Thanks Vivien, your visit and comment is appreciated. Have you been to the Tate show?

Funny. I love Gauguin and was blown away by the big retrospective in Washington a decade or more ago. But I agree with you that there is something bourgeois about (most of) his paintings that he only manages to escape in the woodcuts and carvings. Still, his use of color stuns me, and there are so many painters who are far worse who get so much more praise! Your comparison to Van Gogh is right-on, and I appreciated everything you had to say here! A lot of art is just subjective, n'est-ce pas?

'Those ornate, overwrought, overweight, overprotective gold frames - why why why do museum curators still think they must burden modern paintings with these antiquated trimmings?'

Interesting question. I suspect they are keeping to the style of the authentic, original frames; i.e. the problem is one of C19th taste rather than that of modern curators.

Whether using period frames is the right decision or not… well, I guess the problem is that as soon as you take any different option, you're imposing modern taste on the work. I think if I was hanging it in my own house, I'd find a different frame, but in a museum I don't know.

Beth,thanks. Indeed our views of art and artists are subjective. My view of Gauguin's work is filtered through the lens of what attracts me, or doesn't, about art in general. I do understand your appreciation of Gauguin, even if he doesn't have the same effect on me. As for his colours, I don't know if they're fading with time but many of the paintings I'd seen only in reproductions before seemed in this show to be dull and dark, the paint rubbed thinly into the canvas. As is definitely the case with some of V.Gogh's paintings, maybe the pigments they used were not that long-lasting.

Harry,thanks for your comment. I don't see why modern curators should have to follow the taste of past centuries as far as framing is concerned. After all,the architecture of Tate Modern, and of so many other modern art galleries, certainly doesn't go along with 19th Century taste or that of earlier centuries. So why shouldn't they apply the same criteria to framing for the work that they exhibit? Gauguin and his contemporaries were modern artists (even if they may seem like old masters to us) and their work is not in tune with those ornate frames.

I sometimes see galleries selling paintings and the big gold ornate frames are a turnoff to me where I sometimes won't even go in because I know I won't like the work. They interfere but I think some think they denote value.

Enjoyed this well-thought out and personal reaction to the exhibition. There's no point us all assuming the big names just are fantastic (no questions asked) - much better to work out our own thoughts (as you have done here).

We were in London recently (and even in the Tate Modern) but not in this exhibition. It just wasn't that kind of a trip.

Rachel,thanks for commenting. Too bad we didn't meet up at Tate Modern!
I absolutely agree that everyone should make up their own minds about Great Art, ancient or modern. Of course it helps to have some background knowledge but I'm all for challenging received opinion, wherever it comes from.

I've just watched Waldemar Januszcszak's documentary on Gaugin (BBC 2013). He says that for his large number of submissions to the Universal Exhibition of 1900, Gaugin commissioned plain white frames (previously developed by the Impressionists to highlight colour). He missed the Exhibition because the frames weren't ready in time. WJ says that in at least one of Gaugin's paintings you can see a Gaugin painting hanging in the background - and it has a plain white frame. WJ says that he scoured the world preparing material for his doco, but he never found a Gaugin painting in a white frame. So did Gaugin frame his paintings in gilt simply to help sales, when if he'd had his own way they all would have been framed in white? Or was he just experimenting with white, as he experimented with so many other things in his art? Anyone have any more evidence?

I've noted that my earlier comment appears to have been published on your site. But there's a rubbish-bin beside it, labelled "Delete comment." Is that for me, in case I have second thoughts? Or can anyone delete my handiwork on a mere whim? Not a pleasant thought! By the way, I tried under "Choose an identity" to give my name and URL, but I got a message saying that I had to "nominate a server." What the...? Anything you could do to make your site a bit more user-friendly would, I am sure, be appreciated by all users!

Hello Sean, many thanks for commenting, I appreciate it. No, you won't be deleted! The bin is there only in case of Spam comments and only the blog's owner (me) can delete anything.

I'm interested in your research on Gauguin's framing preferences and am glad that he agreed with me that plain ones are better. I think that the ornate gold ones are simply what museums think is appropriate for paintings shown in a museum - I don't think the artists have much say in that. Anyway at the time of Gauguin, plain white frames would not have been considered acceptable so he was very bold in his choice.

Sean, very sorry about the problem with posting comments here. I have no control over what the Blogger server does. I don't know what 'nominate a server means' but you don't need to give your URL, that's optional.
Anyway, this is my so-called 'Mirror blog', a duplicate of my main blog which is at:
www.nataliedarbeloff.com/blaugustine.html
If you go there, you can leave comments as well.Thanks again.